I will be giving away 3d printed barrels to any model railroader who stops by my table at the Maker Faire KC this weekend.  Table 129.  I have both wood and steel in HO, S and O scale. 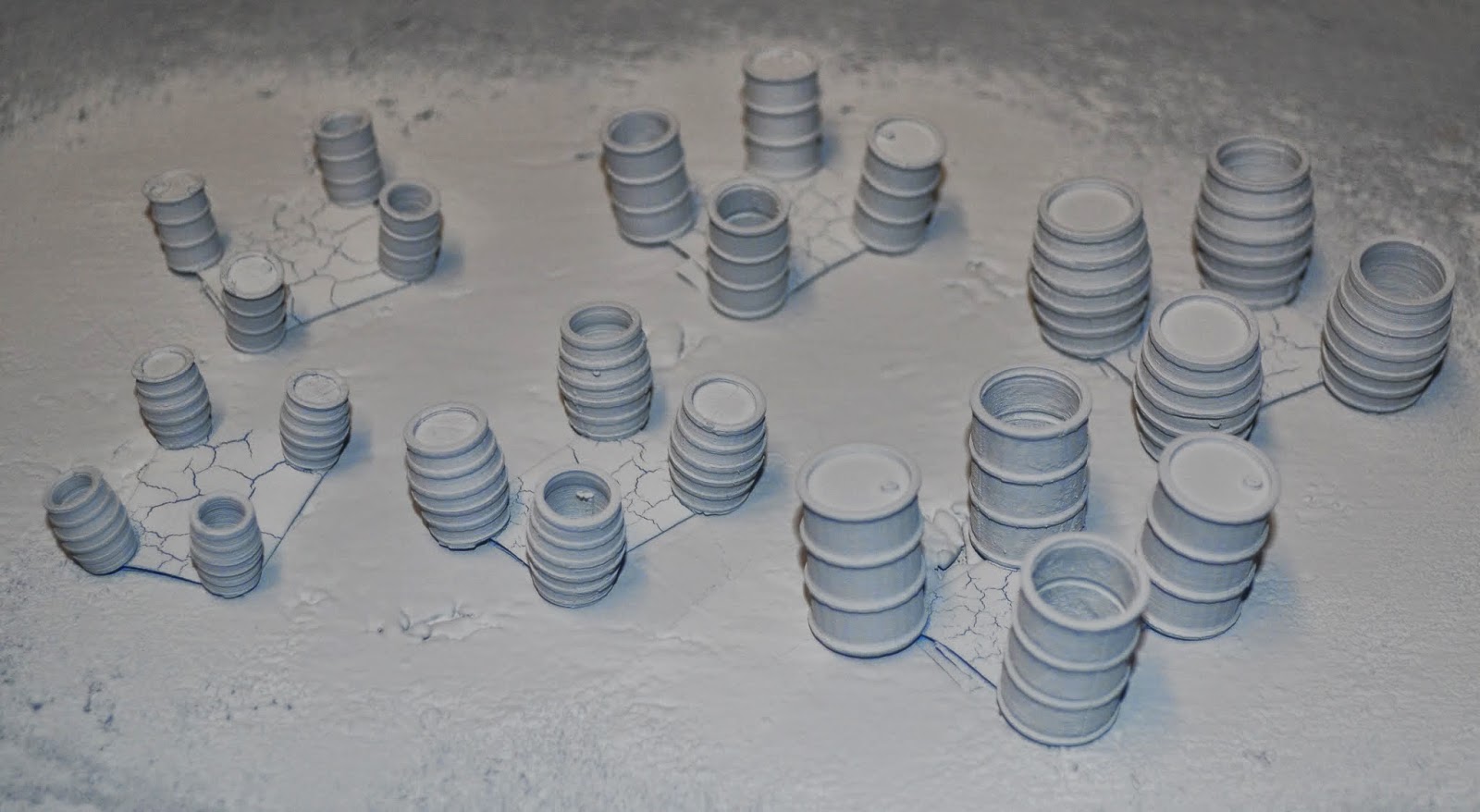 Most of the time, I prime the ABS, as it is porous from the printing process.  Here are all three scales, and both wood and steel.  I print four at a time, just to keep the cycle time down, and two open and two closed in each group. 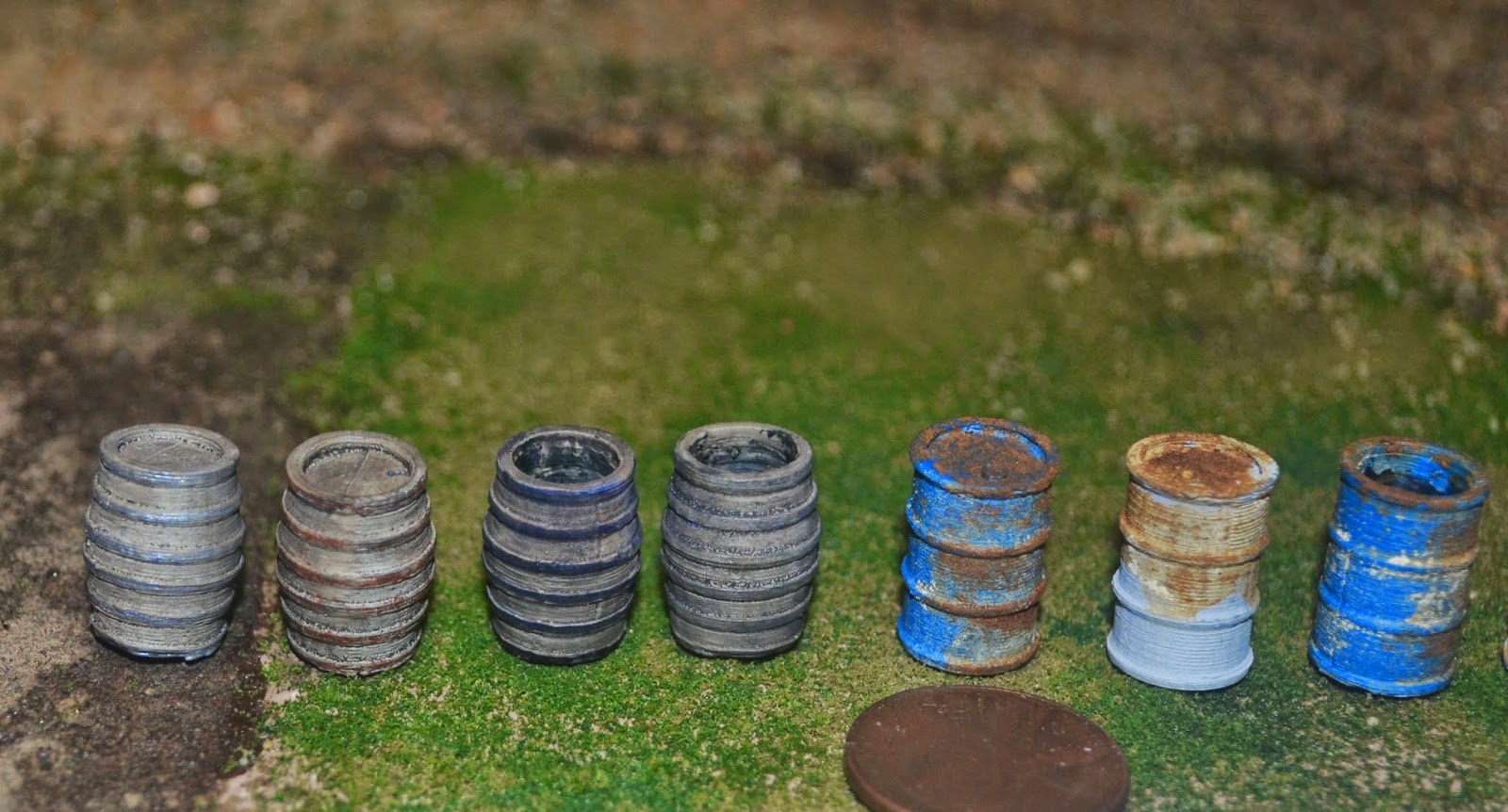 You can click on the pictures, and see a higher resolution, close up picture.  Then you can see the flaws in the FDM printing process.  However, at normal viewing distance, for scenic items, they look fine for most purposes.  I would not want to use this process for printing motive power or for vehicles.  For that I would want an SLA printer at the very least.
Posted by Kent Hurley at 7:27 AM No comments:

Stone Arch Bridges, 3d printed, Down on the Farm 10

I saw some pictures of stone bridges, and thought it would be a good learning project for 3d printing.  Here are the two bridges I have done so far. 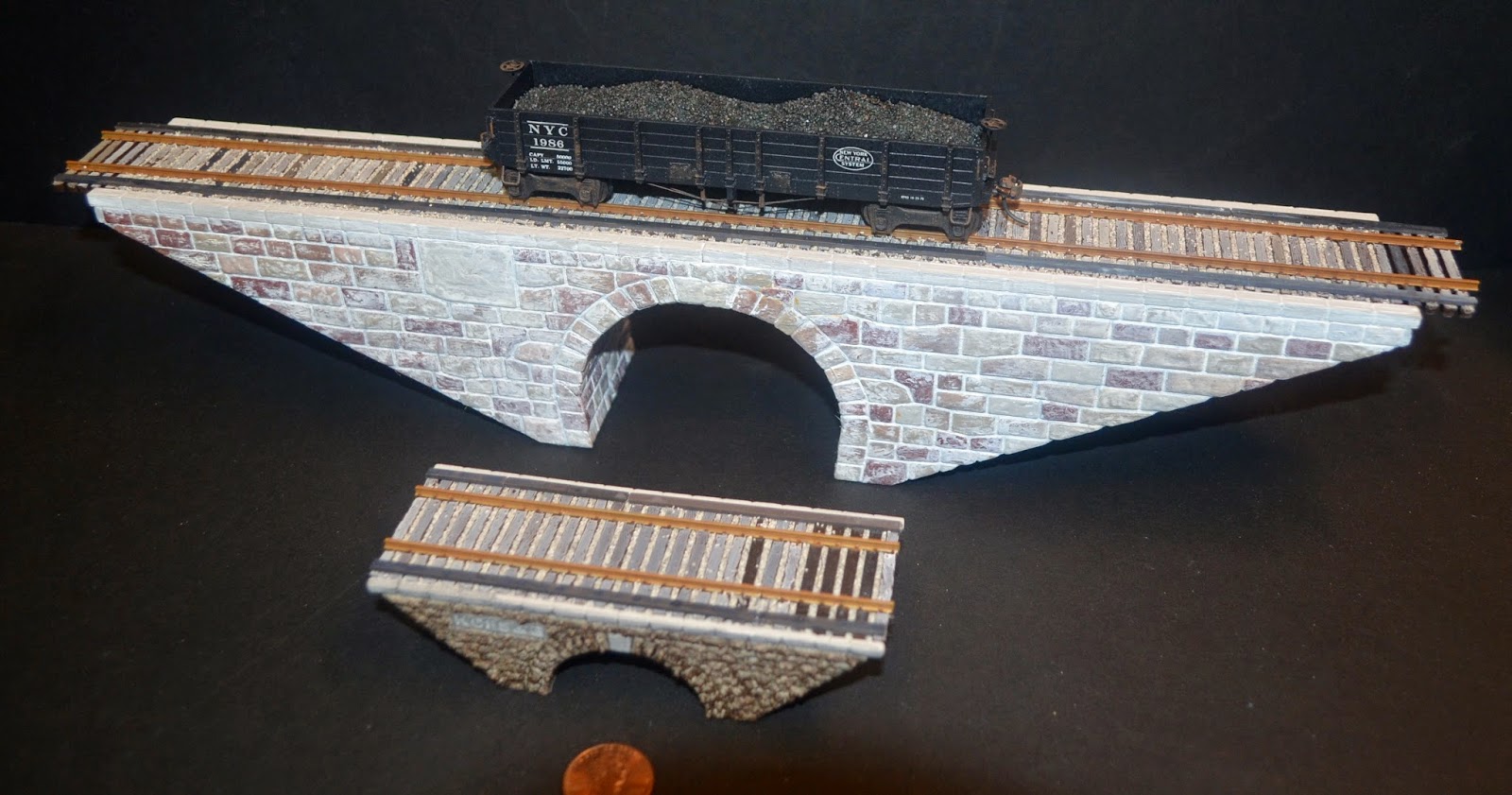 The back one was just to see if I could get something acceptable, and the front one I am using on my hog farm diorama.  I still don't know where I will use the back one. 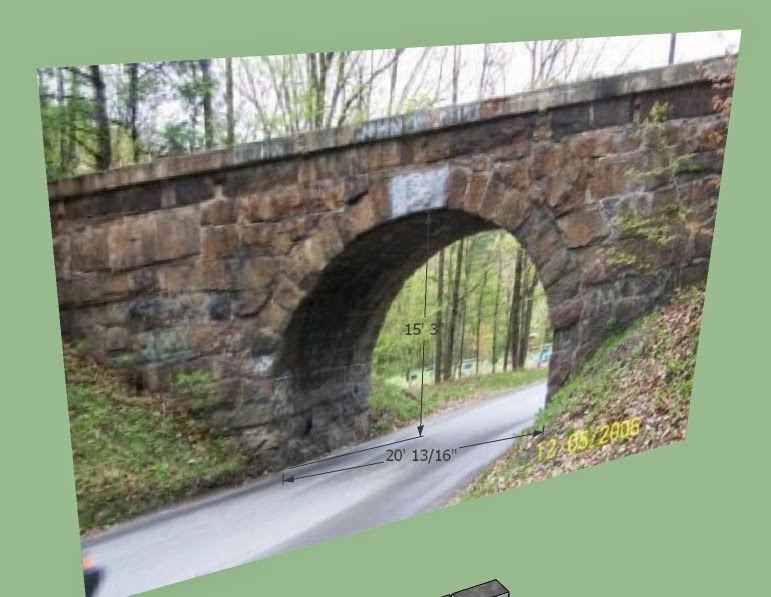 Here is a picture I uploaded in to SketchUp, then I scaled the picture to something reasonable, and used those dimensions to draw the bridge.

The bridge had to be split in four pieces for printing. 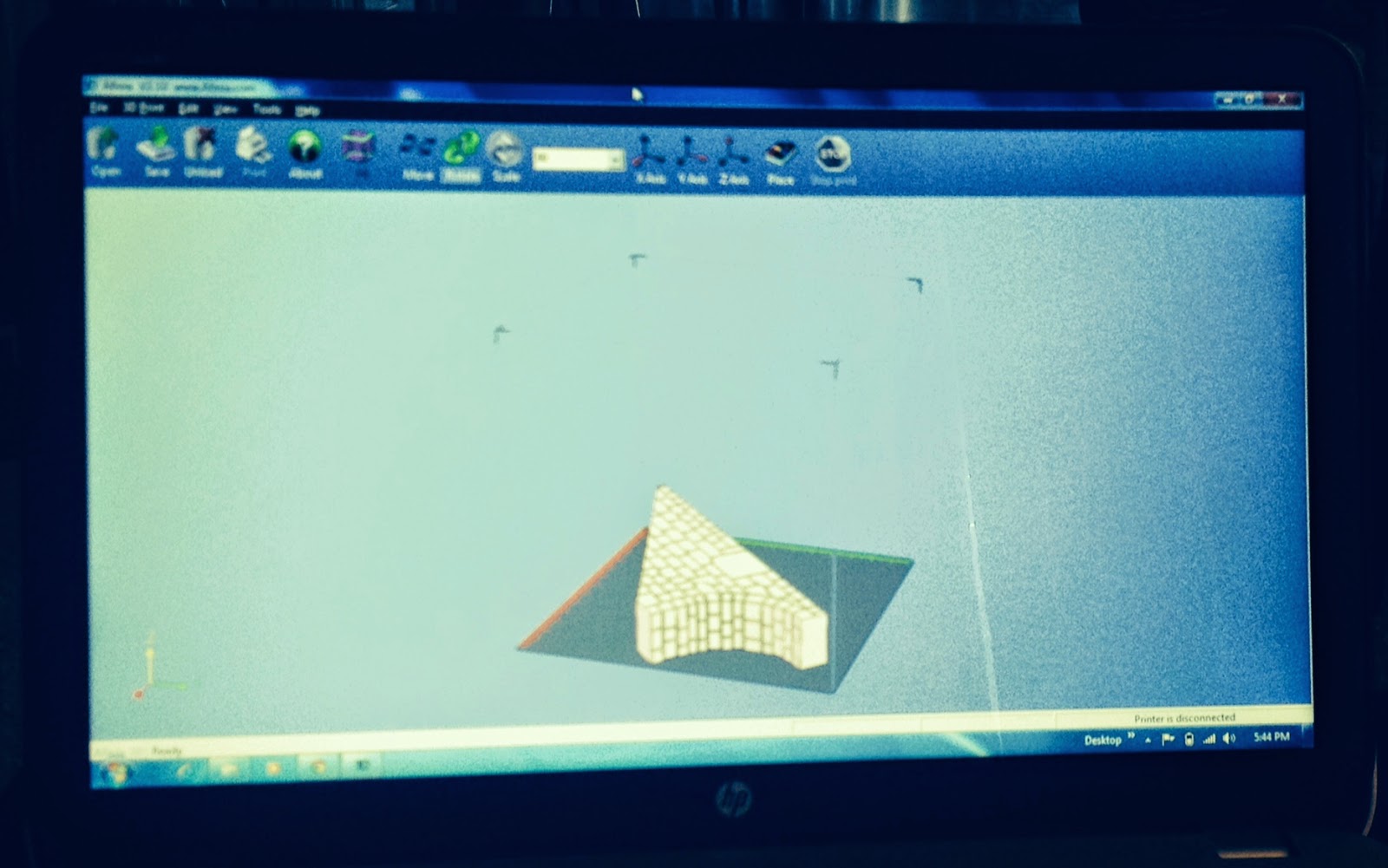 I added texture to the surface of the rocks by mixing Aleene's Tacky glue to the paint.  That filled in any imperfections in the printed surface, gave the rocks some uneven surfaces, and put some color on at the same time.  The top course of stone was printed separate from the rest to adjust the width to fit the track ties.  I used Micro-Engineering bridge track, but won't add the guard rails until it is installed on a layout.

Down on the Farm #10
I have not been working on my hog farm diorama for some time, and really planned on having it done this week.  Some family things got in the way, but I still hope to have at least the buildings placed for next weekends KC Maker Faire (http://www.makerfairekc.com/).  I will have a table there displaying many of the items I have 3d printed.  I decided add train tracks to the farm, and since there is a stream through the farm, I was going to need short bridge over said stream.

Knowing the stream width, I designed a bridge to fit the space.  I decided to add a cut stone with the railroad name to the face of the bridge.  Because the bridge is so small, I did not bother with rock detail under the arch, as it will not be seen.  Also the large bridge above is two sided, so it can be viewed from either side.  This one, because I think I know where it is going on the eventual layout, only needed details on one side. 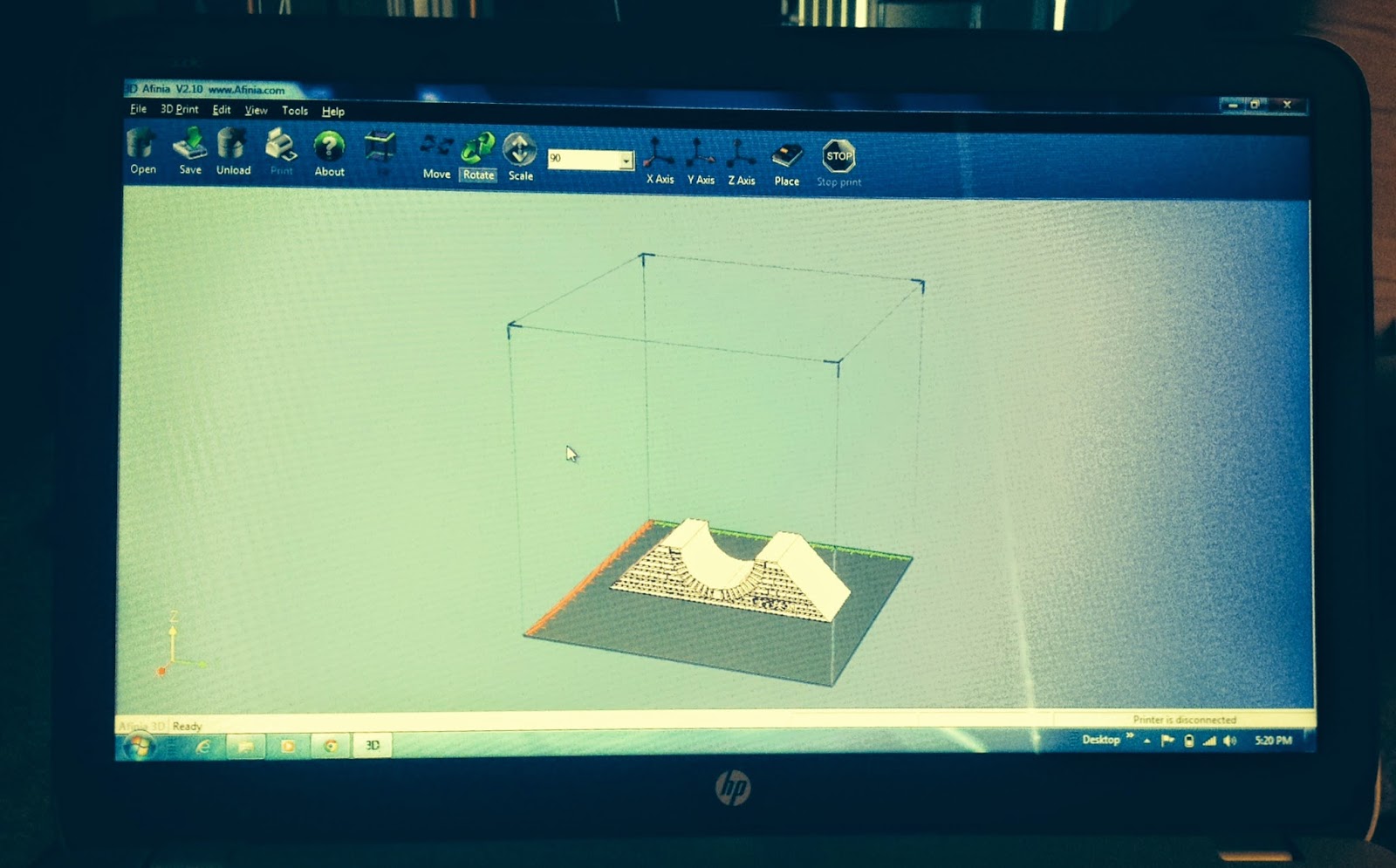 Here is a screen shot of the Afinia printer software, with the bridge positioned on the printer table. 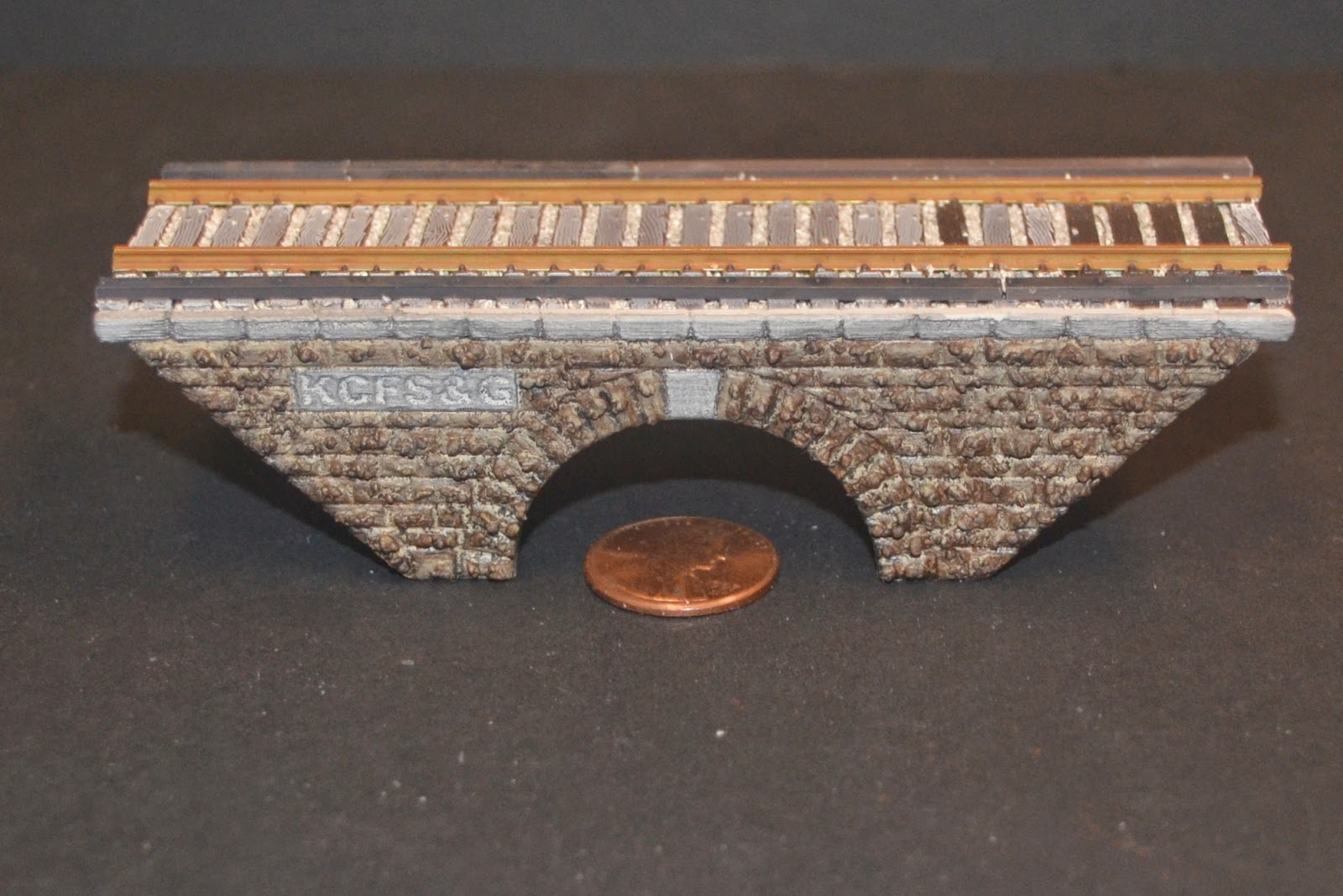 The finished bridge except for installation in the diorama.  I added texture to the rock faces by mixing some sand in to some Aleene's Tacky glue.  I looks okay, but if it were a foreground model, it would be marginal. 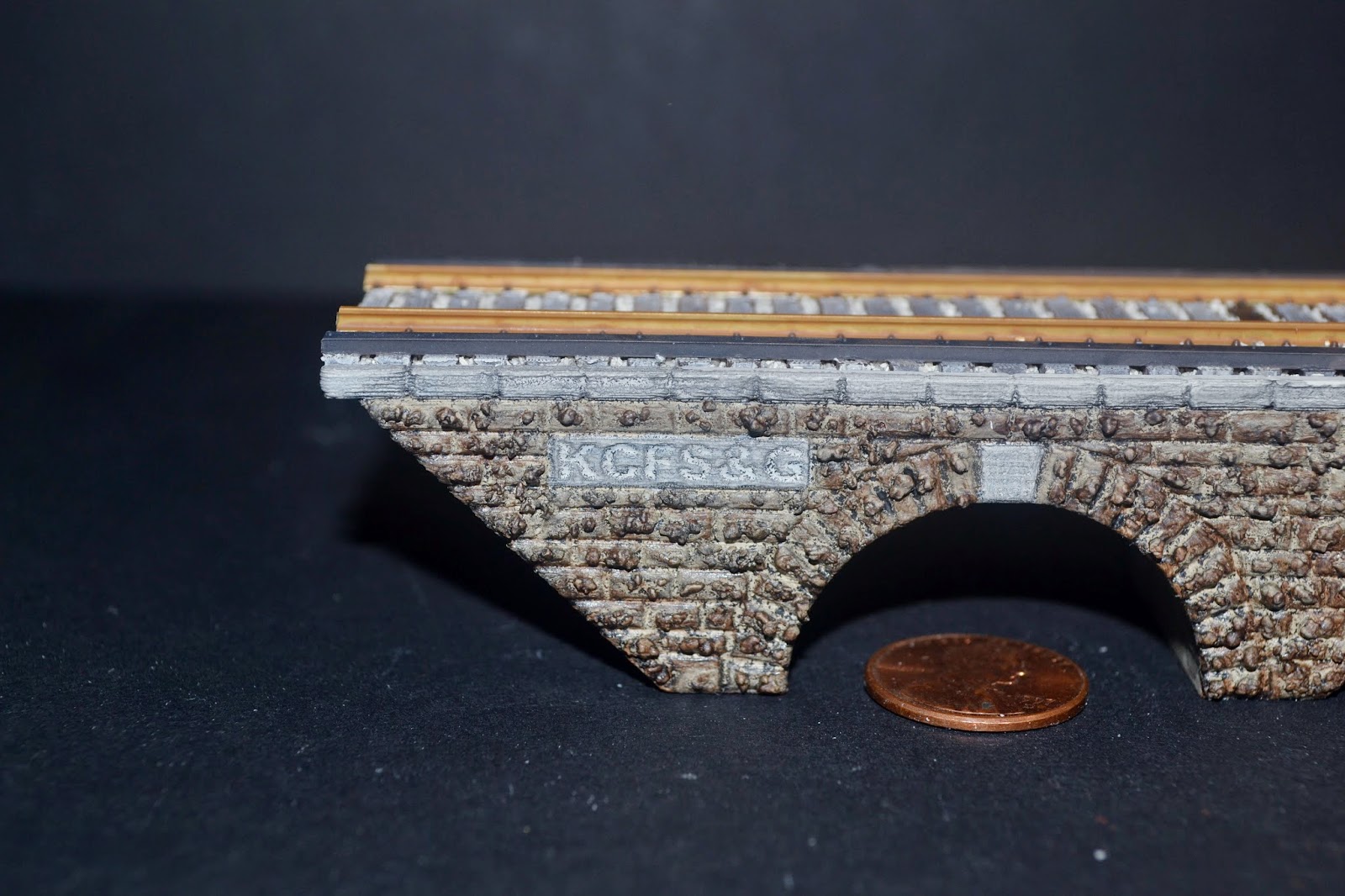 A little better shot of the cut stone lettering, and the texture.  The texture would have been better if I had used finer sand.  Next time! 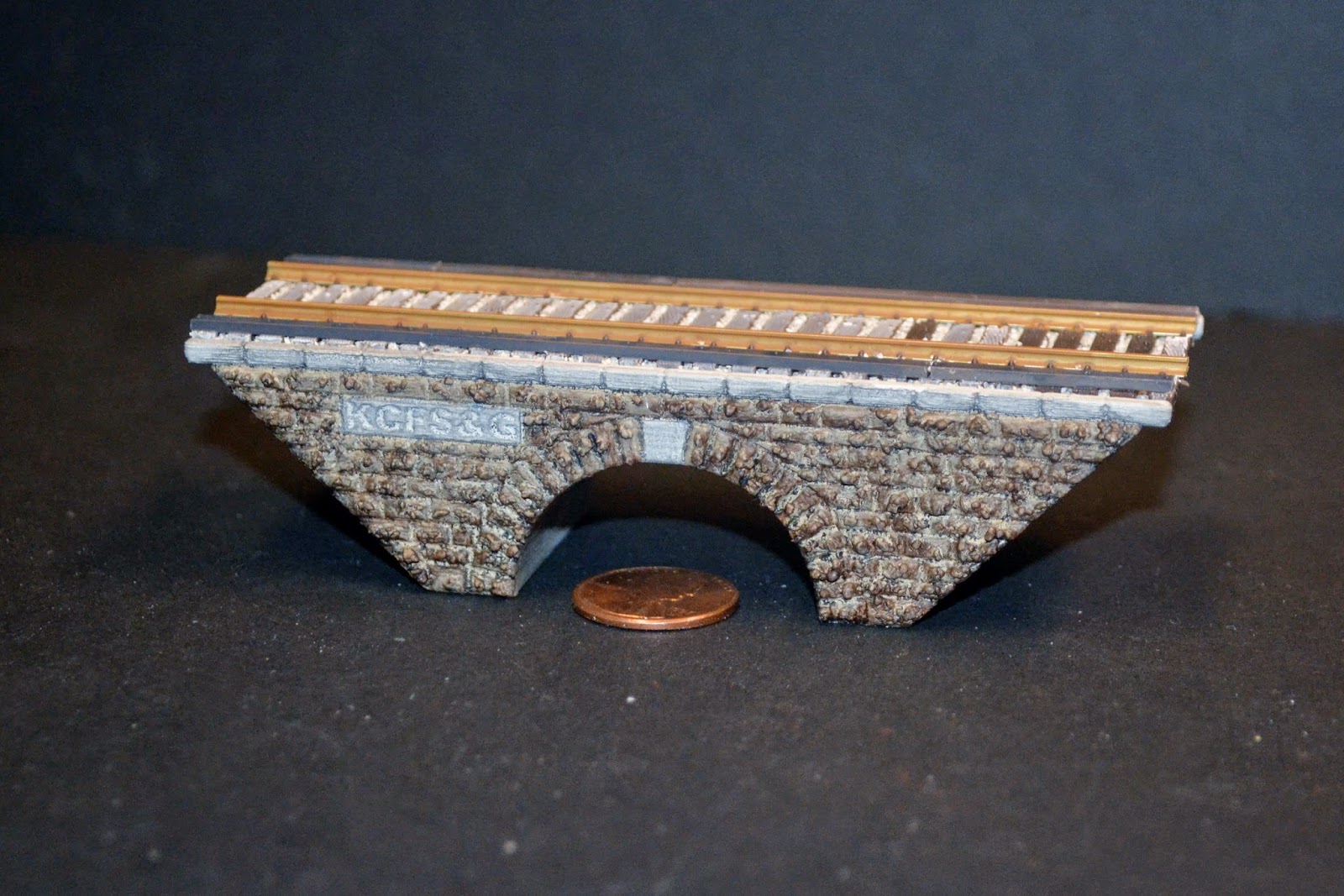 All the Down of the Farm series of posts can be seen at this link:
http://nvrr49.blogspot.com/2014/06/down-on-farm-post-listing.html

To simplify sending people to all the Down on the Farm series of posts, I have added this page, which I will keep updated.  It just makes it easier for me, as now I can just send people to this page, and they can decide what they want to look at.  Most of the structures were 3d printed, and designed by me.

#13 Scenery for the farm, grass, dirt, and a stream

This picture of the Barry well was posted on one of the Kansas City Facebook groups.  The Barry Well was located only a few miles from where I now live, and I thought it would be a nice model that I could use some place either in a diorama or on a layout. 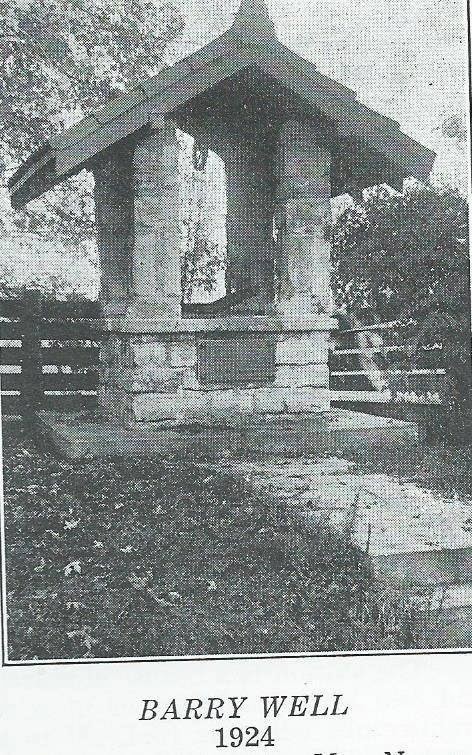 This photo was posted by Gary Brenner in the Kansas City Memories...Vintage Photos, Places and Things Remembered Facebook group.

This was a hand dug well dating back to the time of the Oregon Trail.  It is said that it was one days trip by Oxen team from Liberty Landing. 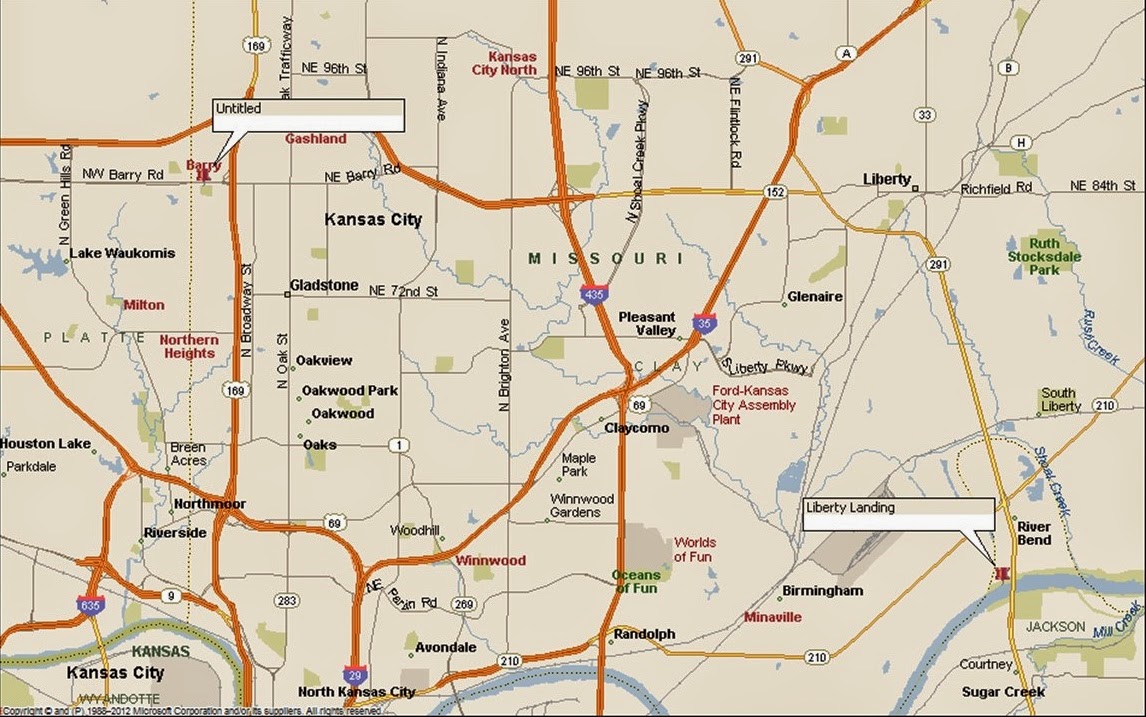 Liberty Landing was about where hwy 291 crosses the Missouri River, and Barry was located about at what is now hwy 169 and Barry Rd.  According to my calculations, that would be about 12 miles. 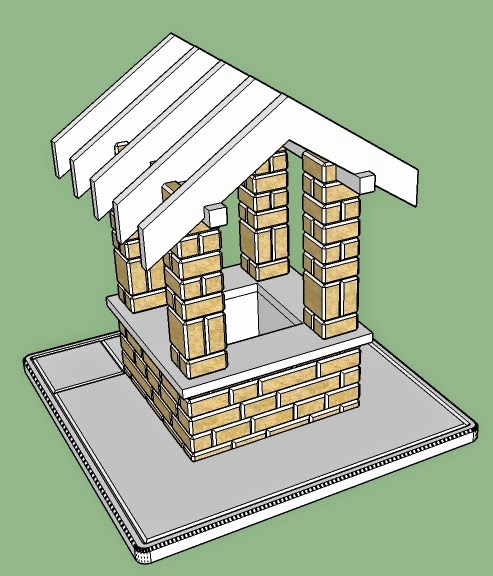 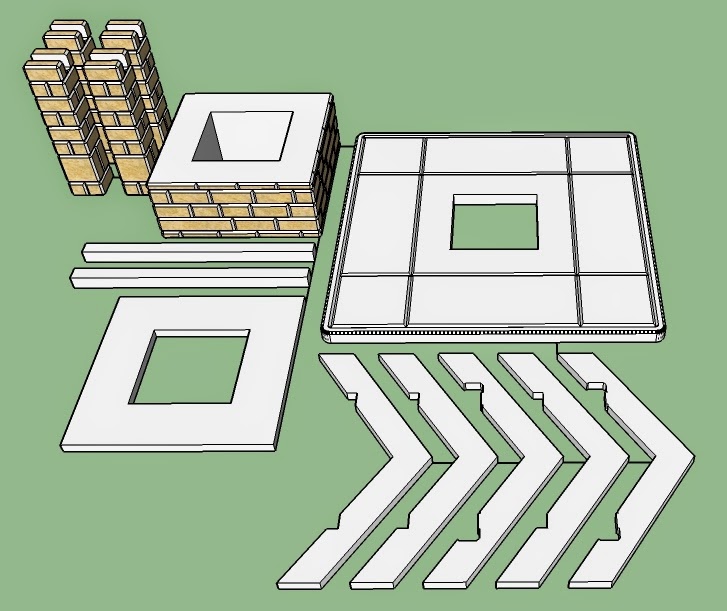 Once drawn as a complete structure, I explode and orient the parts for printing on the Afinia printer. 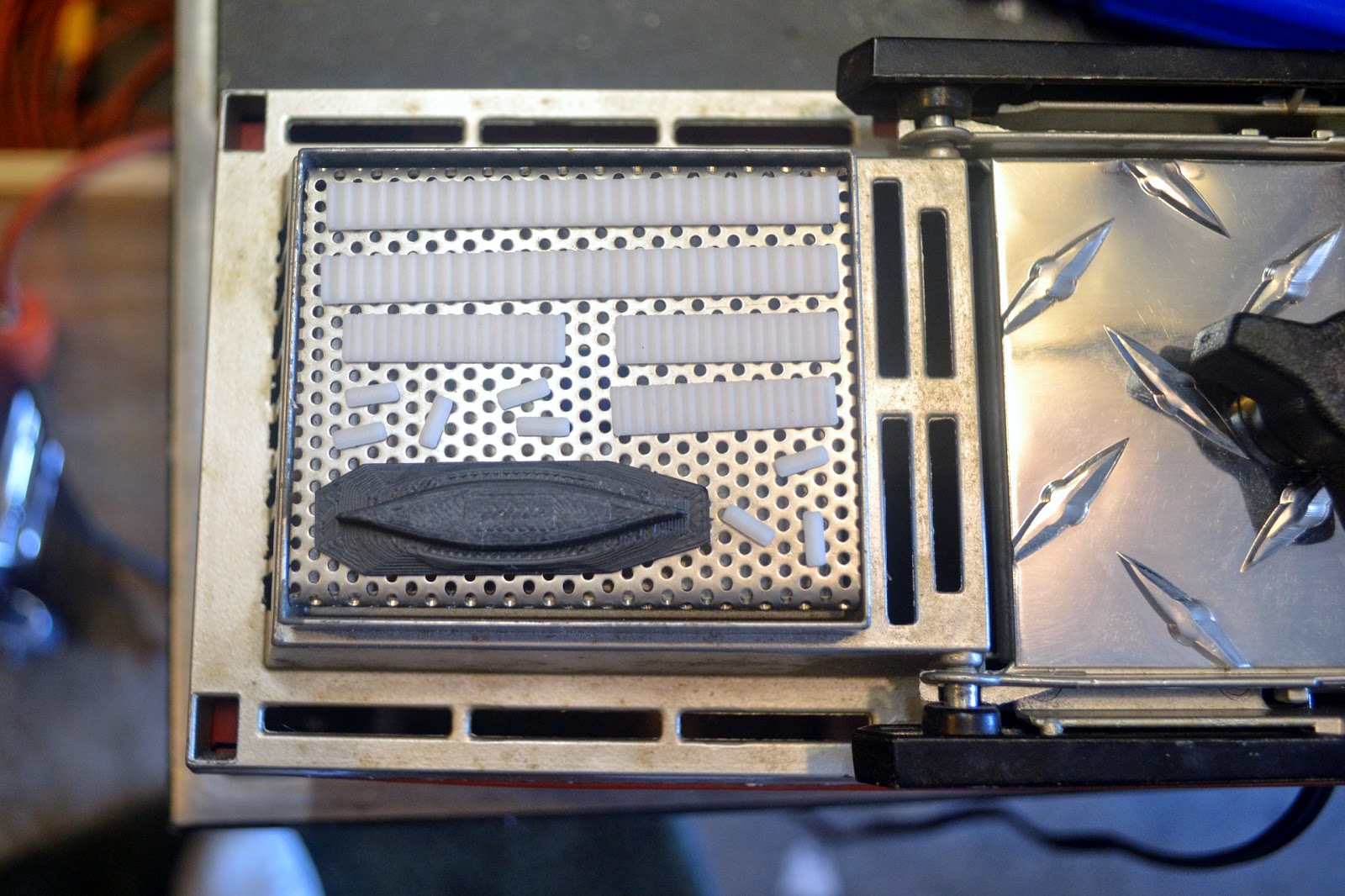 The roofing was another matter.  I decided to go old-school, and break out the 1962 era Vac-U-Form to make the tile roofing.  For more on the Vac-U-Form, see this link for a previous post on who I used it and what I have learned so far.  http://nvrr49.blogspot.com/2014/05/vac-u-form-used-for-making-ho-scale.html 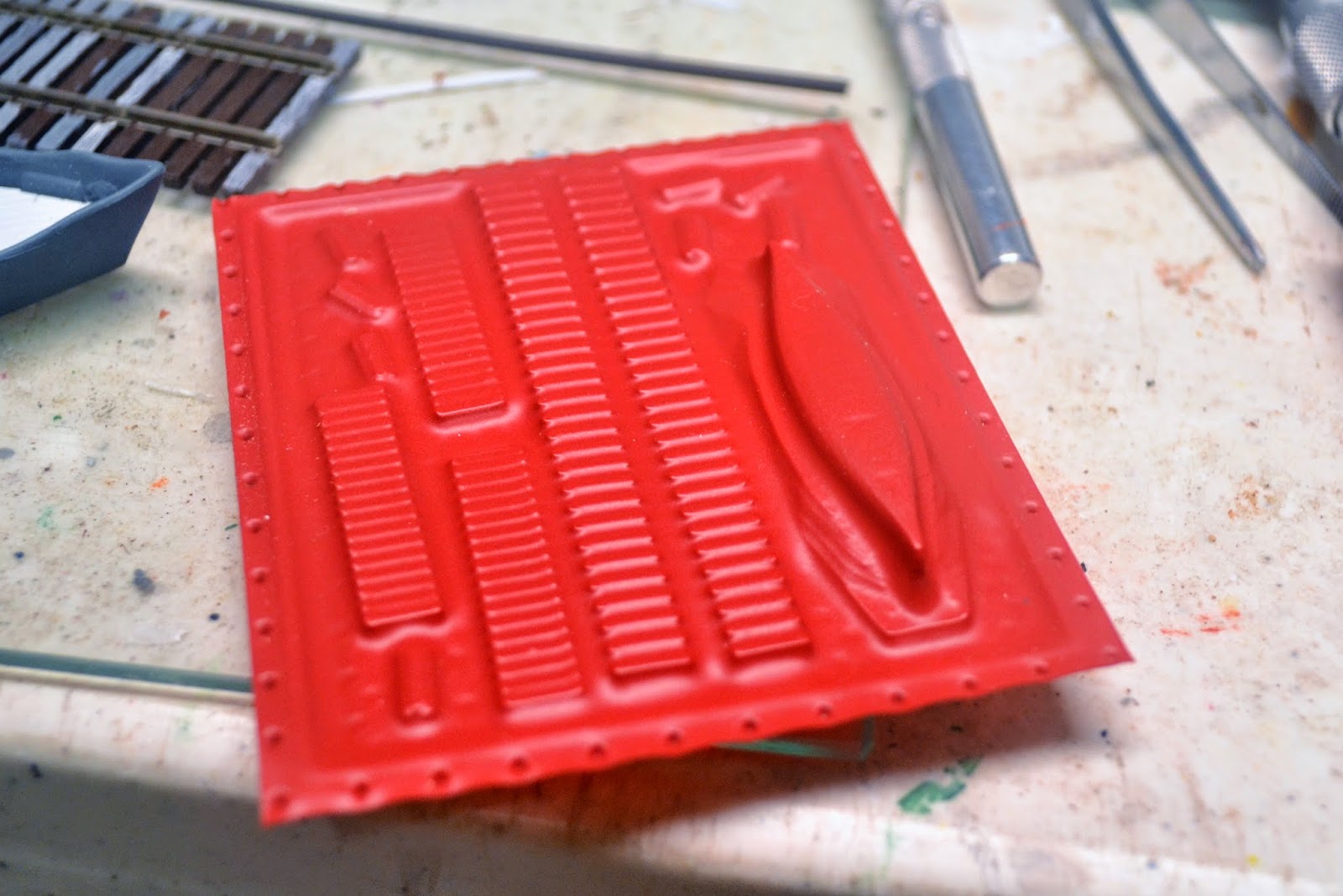 I did some tests, including this one with the canoe.  The patterns for the tile and the canoe were 3d printed and also drawing in SketchUp. 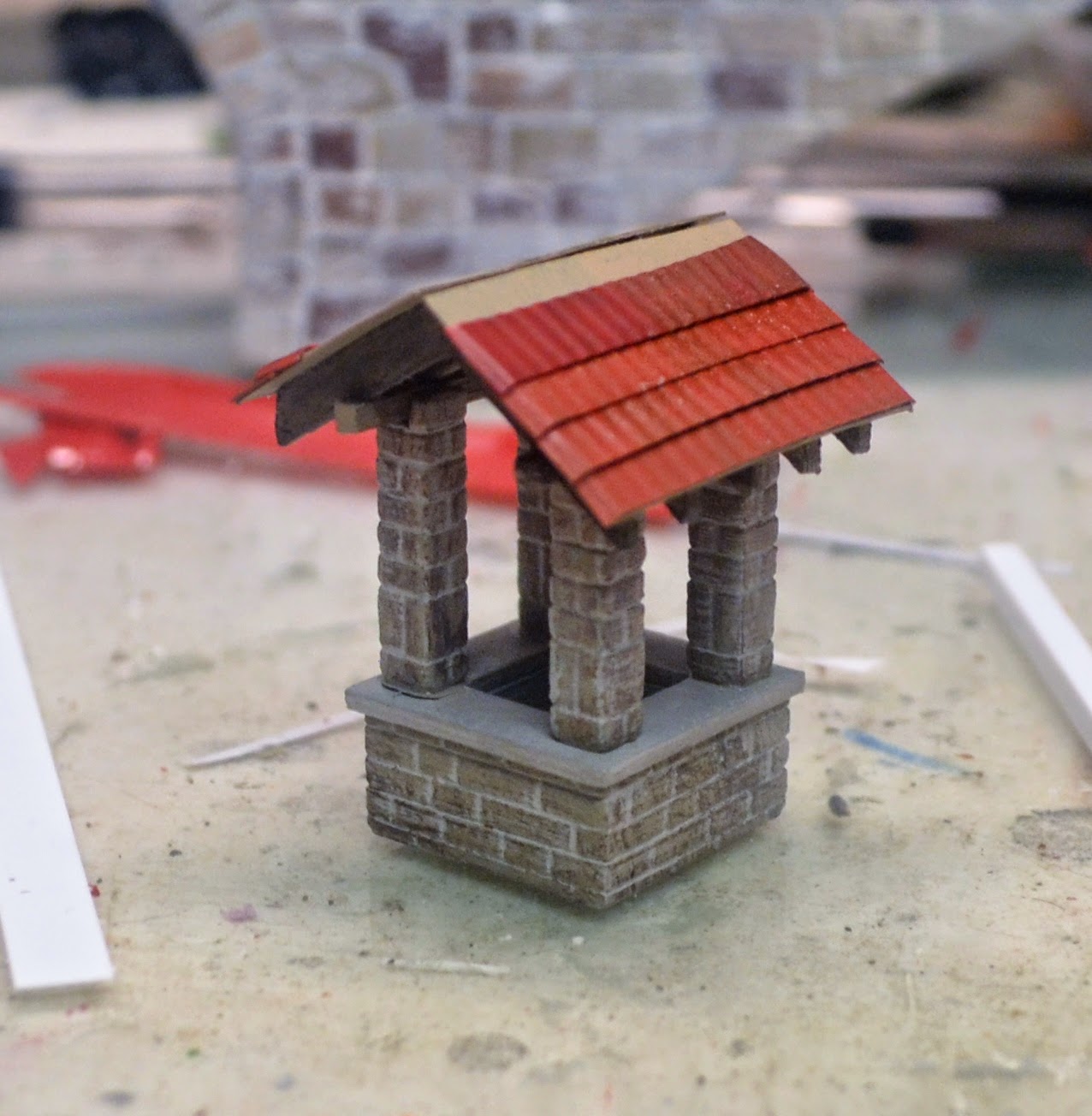 I cut the formed tile in to strips, and glued it to cardboard for the roof. 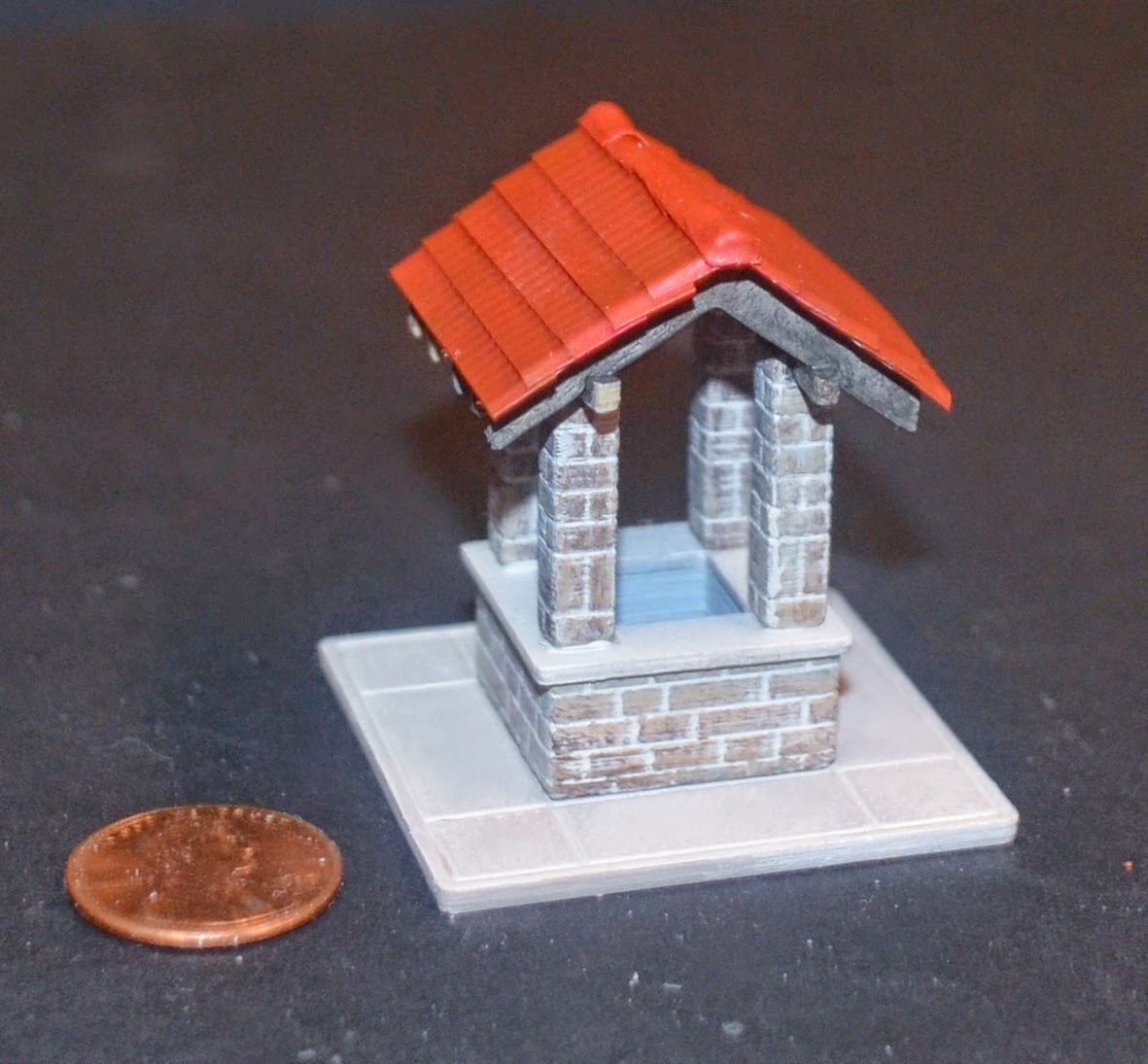 The ridge cap is also Vac-U-Formed, but is individual pieces. 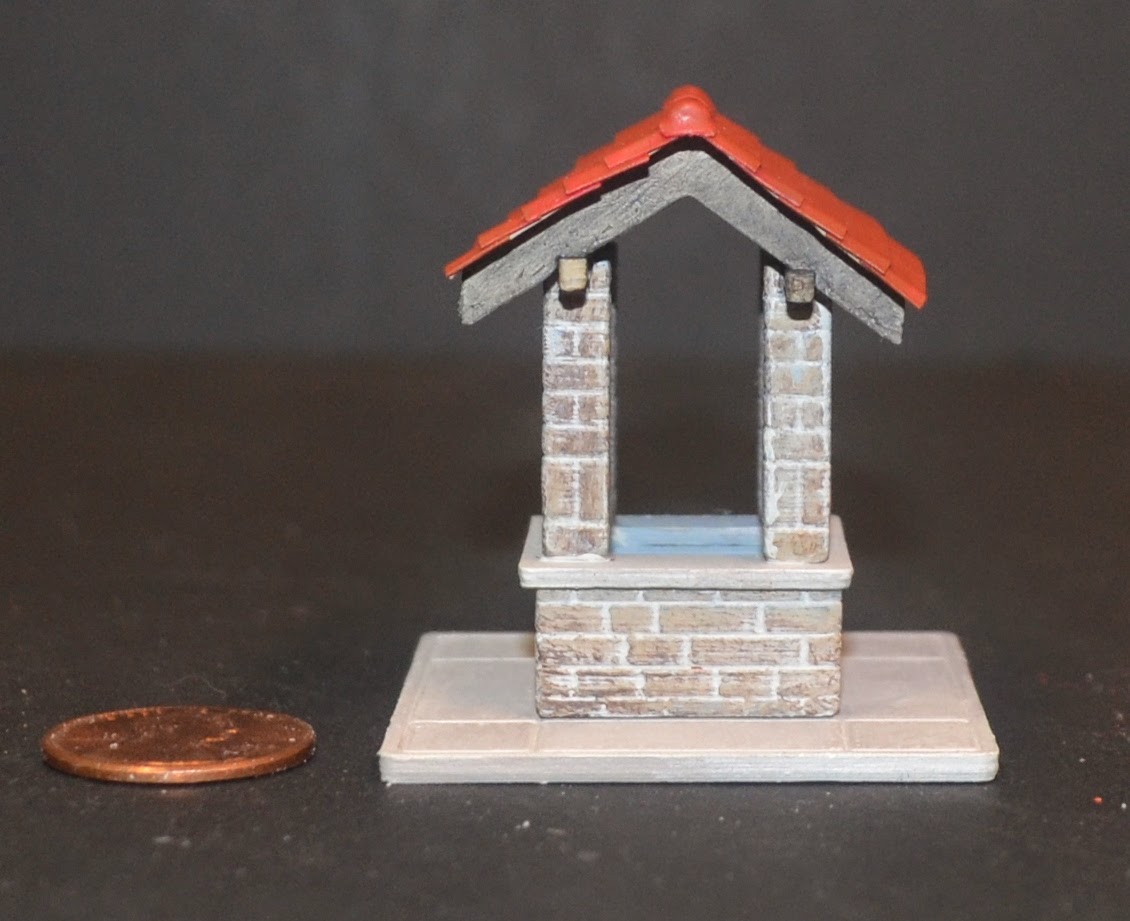 I am not sure what I am going to do with it, but it was a fun, quick project. 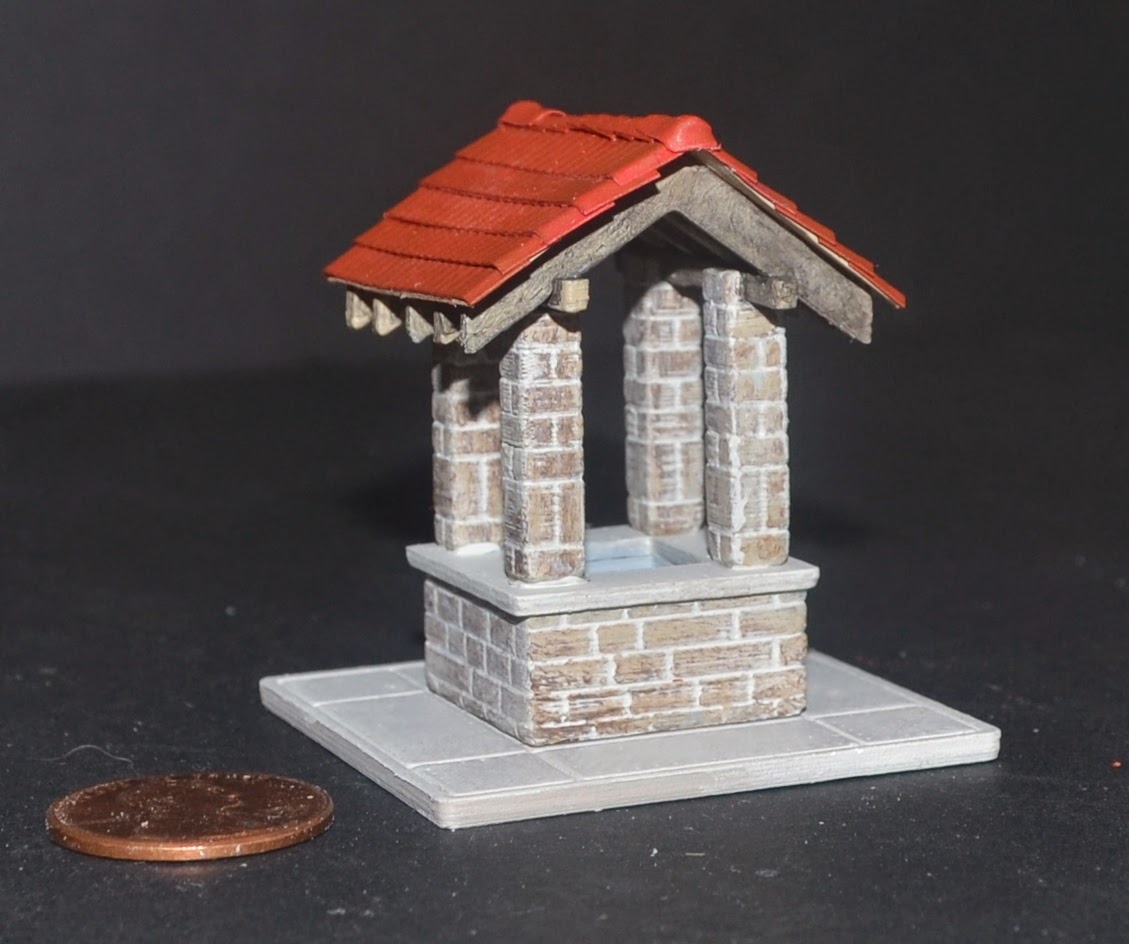 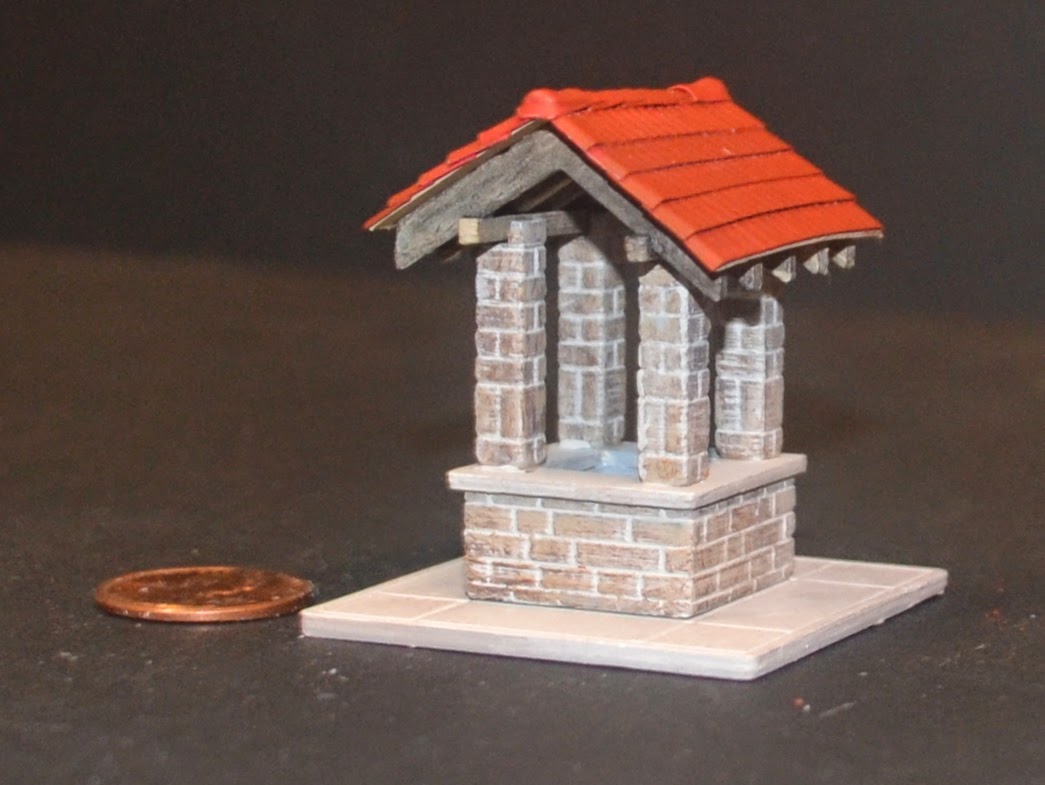 I have to get back to work on the Down on the Farm series, and I have a few more posts to do to finish up the structures on that diorama, so hopefully, I will get motivated to get that done in the next few weeks.  Scenery just ain't my thing!
Posted by Kent Hurley at 6:52 PM No comments: