It is cold in the basement, but I keep modeling anyway! 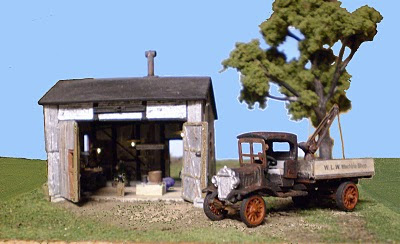 I photo shopped a couple of pictures, a first for me. I am neither happy nor unhappy with the results. I think the biggest issue was the quality of the photographs to begin with. We bought a new camera, so as soon as I figure it out, I will try some pictures of this diorama again. Both the 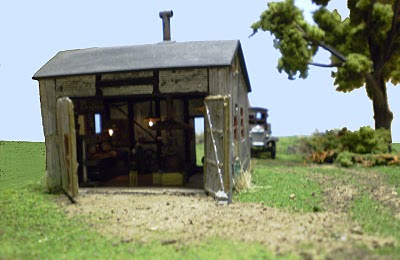 machine shop and the truck are Woodland Scenics white metal kits. As you can see below, I installed lighting, but not enough for the point and shoot camera to pick everything up. The forge and anvil are in the center of the shop and you can see the milling machine on the back 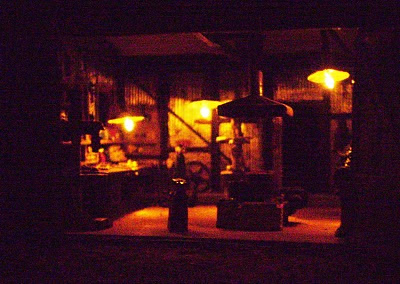 wall. The W. L. W. Machine Shop is named in honor of William Larry Williamson, long time professor of Machine Tool Technology at Pittsburg State. (No, not the real Pittsburgh, the Pittsburg in KS.) As a side note, the spell checker shows the Pittsburg is an inccorrect spelling even though there are at least 22 Pittsburg's in the country and only one Pittsbugh. Go figure.
Gulf Tanker

This is an Eko model that I painted and decaled, and added a few details, like a mirror and license plate.

This is a model I complete years ago, but I got it out to use as an example on a current project. This car was rebuilt from an AHM car that I stripped the paint from and repainted and decaled. I really like to wine cars, even though I don't particularly care for wine...more of a beer guy.
J W Simerly Lumber, Union, MO 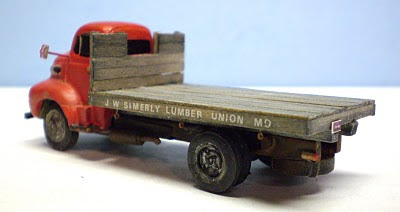 John Simerly was an acquaintance whose passing had a profound impact on my modeling. he was the manager of the Sutherlands Lumber in Moberly, MO and retired after 40 years with

Sutherlands. John and is wife had lots of plans for what they were going to do in retirement, but both him and his wife passed away soon after he retired, fulfilling few of their dreams. It made 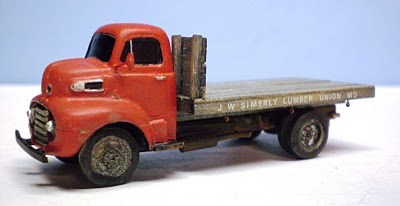 me reevaluate how I was spending my free time. John was from Union, MO. The model is a Stoney Mountain Miniatures kit. The lettering was done with individual letters. It is a stock solid resin kit, with my usual additions, a mirror, tail light and license plate.
I am working on some building and some motive power for the eventual HO model railroad. Maybe I will actually get them done, them maybe not. I have vintage cabbose that is taking up a lot of my time. Till next time.
Posted by Kent Hurley at 8:33 PM No comments: