It has been a year since I started this blog, and I must say it has been fun.

I started working on by Civil and my Electrical certificates to become an NMRA Master Model Railroader. Many thanks to Brad Morneau for tutoring a group to keep us on task. I spiked my first rail a few days ago, and I must say that Brad was right when he said, "people who hand lay all their track need therapy".

After I get this little diorama done, I hope to do as little hand laying of track as possible from that time forward. Above is a track plan I drew in Google Sketch Up. The pink rails are the rails that I have spiked down to this point. MANY hours of spiking and aligning.

When finished this will be a dual gauge interchange diorama, with four hand-layed track elements (you have to hand lay three elements for the Civil Engineering certificate). Starting in the upper left, the first element is a gauge separation turnout. A 30" narrow gauge track comes in from the upper left and goes completely across the diorama. The standard gauge line comes in at the lower left and does the same, but there standard gauge turnout that allows the standard gauge freight cars to switch up to some dual gauge track in the center top part of the plan. Just enough room for one standard gauge car. So really, on the left side, I have a standard gauge turnout, a gauge separation turnout and a crossover, all in one small area. In the upper right is a 30" right hand turnout that angles off to the upper right and also allow narrow gauge trains to cross the standard gauge siding in the center bottom of the plan. The crossing will take 24 individual pieces of track. It took me two hours to lay the four I have done so far. A lot of time aligning and gauging, then checking as I spiked. Somehow I feel like this is keeping me from modeling, cause it is too much like work. I do need to trim some ties, as I got them a little long is some areas. I also need to finish staining the ties. Besides the stained ties, the gray ones, I used three different spices of wood: Basswood, Aromatic Cedar and Western Cedar. The cedar ties I cut myself, and they are not recommended, as they are hard to spike. I pre-drilled every one of the cedar ties that I spiked to keep them from splitting. Note that I used mostly Basswood ties for that reason. Considering that I am modeling Southern Missouri and Northwest Arkansas, both of these would be native species. Basswood is certainly easier to work with. I need to go buy some more rail, but I am glad I am out, so I can get back to modeling ;).

Back to model railroading...
Posted by Kent Hurley at 10:10 PM No comments:

October already, where did September go?

Lots of work time in August and September, so not a lot of modeling got done. I have LOTS of projects going on, including a couple dioramas, and another one I am starting this week. Why finish anything, just start more projects. Just started a static baby articulated 2-4-4-0T. My first attempt at anything steam engine related.

This is a Greg's Garage solid resin casting of a 48-53 Chevrolet with a bed I scratch built out of styrene. The palletized earth mover tire is from the junk box. The pallet should have been set on the bed 90 degrees from the way pictured, as it would be hard to load and unload sitting that direction, but I have unloaded worse messes.

This is a Keystone cast metal kit. It is an HOn3 model, two to a kit, and I have a couple more to assemble. Most logging railroads were marginally maintained, so I am planning on weathering all the logging and mining equipment heavily. In this case, the car numbers are hand painted. 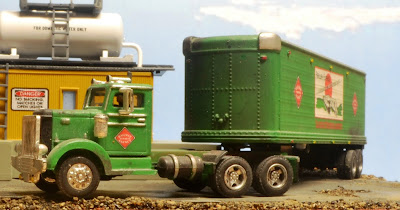 Here we have an Ertl model of a 1949 Peterbilt. I bought it as shown, with a nice weathering job 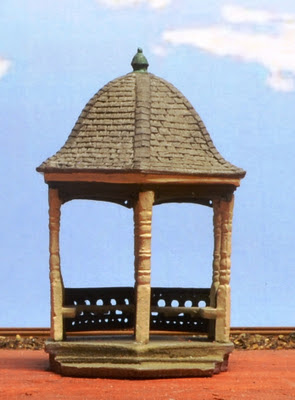 The gazebo is a Woodland Scenics white metal kit. It was damaged, so I had to pin a couple of the spindles. Oh no, a fourth diorama, I am going to build a park, gotta have some place to put this.

Next week I will have several open loads for flat cars, a caboose and two HOn30 flat cars, along with a tracked loader and a lowboy trailer. Happy model railroading
Posted by Kent Hurley at 8:12 PM 1 comment: