It is HOT, so I am staying in to do Model Railroading

It has been really hot here for a couple weeks. Getting in as much modeling as possible, and finished up a few things.

Kelso Feed Stake Truck
Below if a Varney, I think, stake truck. The cab portion has Varney stamped on the bottom, but it looks like maybe the bed was added. The bed is poor enought quality, it probably is a Varney. I added a tail light, ourside rearview mirror, rear differential, and tail pipe, along with painting, 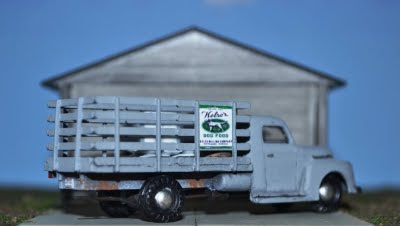 lettering and adding a load to the bed. The bed had previously had a load in it from the previous owner, so it needed something to cover up the scars. The signs on the side of the truck were photoshopped from a feed bag image I found, and the bags in the bed are decaled with products 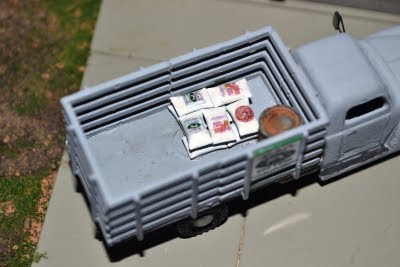 that would have been available at Kelso Feed in beautiful Pittsburg, KS. I also added seats, a windshield and steering wheel.

NV #5, 44 Ton
This is a Bachman GE 44 Ton switcher that I painted and decaled for my Nirvana Valley Railroad. I will be finishing up any projects for the NVRR and from now on, the vast majority of the standard gauge private road name items will be labeled for the Kansas City, Fort Smith and 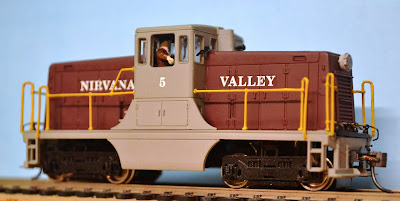 Gulf Railroad (KCFS&G). I have a couple more of these, and I may kitbash one to a 3' narrow gauge loco.

Farm Truck with Hay Load
This truck is a kitbash of a cab from an unknown manufacturer and a Maisto military truck. I think I used the cab from the Maisto truck on one of the Central Concrete trucks. The hay bales are made from glueing little piece of sisal twine to blocks of wood. One of the projects you think 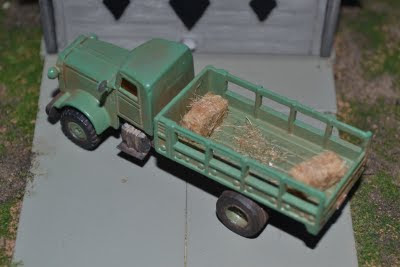 is only going to take fifteen minutes, so, your are going to make a lifetime supply, so you don't have to do it ever again. Then you realize that you can only glue hay to half the sides at a time, as the bale has to lay on one dry side to let the other sides dry. And cutting all that twine takes a 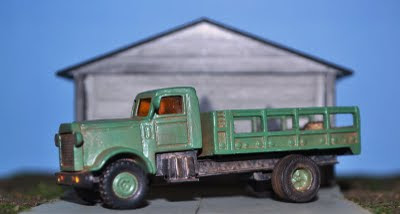 long time. Hate to think how much time I have involved in those hay bales, but I did make plenty, so I should not have to do that again. I added a tail pipe and the usual mirrors, licience plate and tail lights to the vehicle.

Holly Passenger Car
I built this a decade ago, okay more than that. I had it out for some reason, as I am working on another passenger car to which I want to also detail the interior. In particular, figureing out how

much room I needed for the restroom. I have not built very many passenger cars, but I currently have four in the works along with a drover caboose. More next week, as it looks like I will have a couple evenings free this week to finish up some model railroad projects.

Posted by Kent Hurley at 5:07 PM No comments: