When ever I come across a cheap out of scale vehicle, I always look to see if there are any parts or pieces I can use. Some years ago, Kellogg's offered some Matchbox cars as premiums, and I have been holding on to them for a decade or more. I finally took the time to really look them over, and found the width of the box was not too bad, but the fenders made the vehicle too wide for HO scale. The wheels scaled out at about 4' in diameter, so they would at least have to be 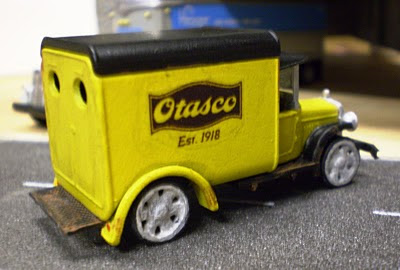 turned down and new tires made. I kept the hood, box and radiator and head lights, but pretty much everything else came from the scrap bin. Although it really does not show in the pictures, the back bumper has a see through deck made from an electric razor screen. The wheels were 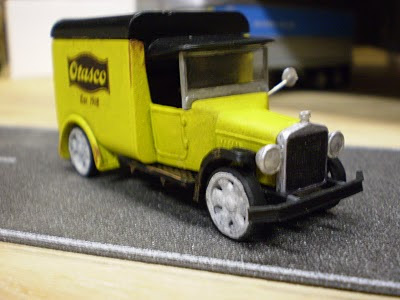 made from metal flowers from the scrap booking section of Hobby Lobby, and the tires and wheel rims were made from styrene tubing. The OTASCO decal was photo shopped from a picture and printed using a photo printer on clear decal paper. I photographed the model on a Route 87 module I started.
This next HO model uses the wheels from the Kellogg truck above, but I cut the tires off and turned them down by chucking them in a drill and filing them down. I used styrene tubing for the wheel rims and tires. This truck started out as an Anheuser-Busch truck, probably about 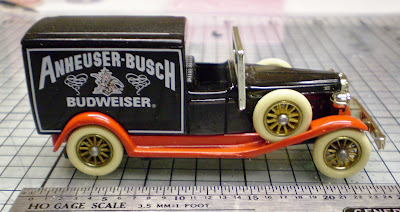 1/64 scale. Judicious use of a metal cutting wheel on the a Dremel tool made fast work of cutting this to pieces. I think the only thing I used from the original truck was the deliver box. Everything else came from leftovers from various other trucks and cars I cut up for parts. The 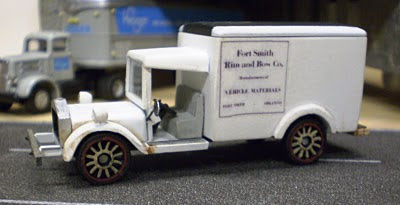 decal is based on an advertisement in the Frisco employee magazine from back in the 1920's. Fort Smith Rim and Bow, actually was still in business until this century, however they made stair parts, not vehicle parts. Yes, the Rim was the rim used for wheels on Conestoga wagons 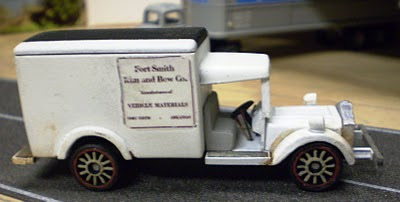 and the Bow was the bow that held up the canvas roof on the wagon. Since they were a company dealing in wood, I made the running boards and both the front and back bumpers out of wood. I also painted the wheels to look like they have wood spokes.
I am just about done with a Cook paint box van and a Junge Bakery delivery truck.
Posted by Kent Hurley at 7:39 PM No comments:

I have found time to finish up a couple model railroad freight cars. This first one is a vintage

Varney tin kit. I did some repairs and weathered the deck. Otherwise it was assembled per the kits instructions.

This next car is a Jouef European prototype double cask wine car. I have labeled it for the my mother, and no, she does not like wine, but her ancestors/relatives in Europe made/make wine. 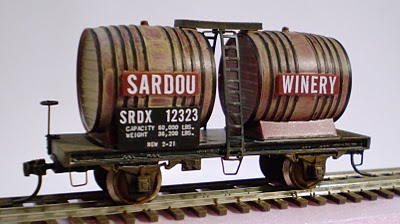 I did a lot of weathering to this model as the original assembled model was very plastic looking. I added American prototype details and carved off many of the European 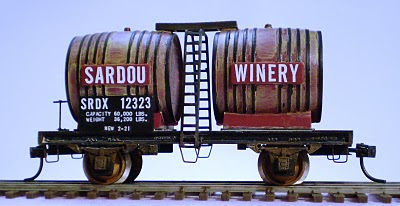 prototype details. I used individual letters to decal all the larger lettering. I kept the original wheels, but I may have to change them, as the flanges are so deep that they run in to the tie plaates on code 70 track.

This Gulf Good Gas car is a Model Power RTR model. Since I plan on modeling a Gulf refinery, I have one of most Gulf Oil models offered in HO scale. I don't believe this is based on a prototype, and the logos on the model were too new for the late 1940's era I am modeling.

I painted over the old logos and printed new decals, and applied them over the newer era logo. I did some moderate weathering, and highlighted some of the details, on what is generally a low price/quality model.

My next installment, later this week, will feature some HO scale vehicle kitbashes I have been working on.
Posted by Kent Hurley at 1:30 PM No comments:

I am a dull boy

All work and no play.
I attended the Turkey Creek model railroad meet this past weekend, and I had a great time talking with my friends from Southwest Missouri.
I have not had much time to model in the last few months, but I have gotten a few things done. This depressed center flat car is scratch built from styrene. I used Tichy brake stands and brass ladder stock. The tie down loops are from Kadee coupler pockets.

I think this is a Silver Streak kit? OK, I could go look at the box, but really, what does it matter. I assembled this per the kits instructions. I used Model Flex Paint for the interior and ends, the sides come painted and lettered.

This six dome tank car is a Thomas kit I bought off ebay already assembled. It needed some paint touch up and straightening of some parts. but it turned out nice.

This kitbash is from the 3 in 1 series from Roundhouse. This kit was designed by Gerry Dombroski and he sent me the kit parts he had. His web site is http://kitbash.ourpage.com/index-linked.htm and is a wealth of information regarding this series of now discontinued kits.

I have several dioramas in the works, so hopefully I will get some time to get back to model railroading.

Posted by Kent Hurley at 7:42 PM No comments: