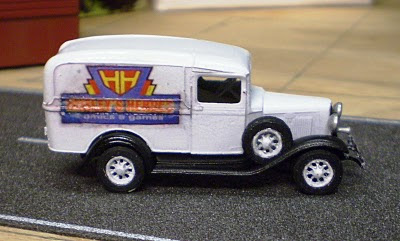 I have been working on several vehicles for a main street scene diorama. To date the scene, I want most of the companies shown to be recognizable as 1949 companies, or at least not modern companies. The exception to this is the vehicle to the right, which is lettered for my son's comic and gaming shop which opened in 2009. They will have a shop in my 1949 downtown, so I figured they needed a vehicle that was of the correct period. Inside the store will be displays of period comics. The truck is a Wheel Works metal kit. 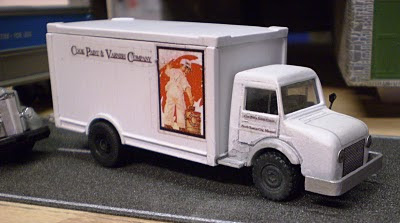 Cook Paint & Varnish was a major manufacturer ini North Kansas City. They are no longer making a retail product and the industrial products division is owned by Daves Paints. I did a little research and came up with some appropriate signage. In fact the boy painting sign is still on the front door to Sebus hardware in Weston, MO. If you want to get the feel of an old time hardware store, stop in to Sebus Hardware in downtown Weston. The cab is a heavily kitbashed Roco Unimog and the truck box is a cut down 40' trailer. 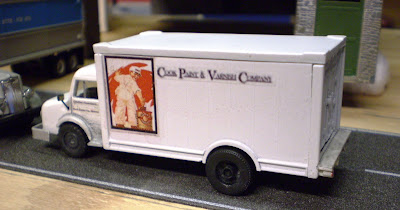 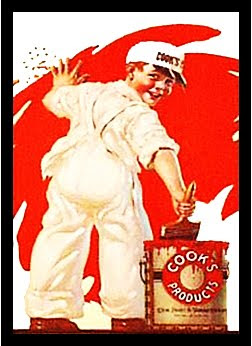 This picture was taked from a deck of cards and cleaned up in Photo Shop Elements. 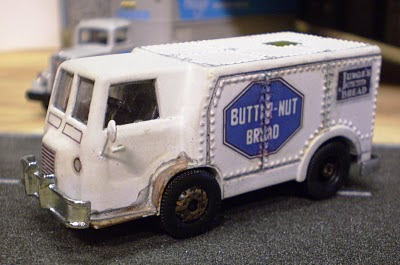 The Junge Bakery was located in Joplin, and was a major force in the economy of the area. The Butter-Nut Bread logo, and on the other side of the truck is a Quaker-ette Cracker sign, we lifted from an old postcard. After many hours of work in Photo Shop, I was able to print out some useable decals. The cab of this model is from a Bachman COE tractor and the box body if from a Hot Wheels armored car.

Now to a railroad car. This was scratch built rock quarry car based on a magazine article. The wood looking deck and end are, guess what, wood. All of the underframe pieces are brass that I soldered together, Brass, I felt, was my only choice if I was going to have enough weight with an empty car. The car is designed to tip to either side to dump it's load. The tilting blocks are modified brass

bridge pieces from Precision Scale.
Looking at the underside, you will notice, besides the brake rigging, that it is 3' narrow gauge. These are brass trucks, again for the weight.


Untill next time, when I will show three or foru kits I have finished along with another scratch built car.
Posted by Kent Hurley at 7:15 PM No comments:

I have several items for sale on Ebay, seller name nvrr49. I am featuring here item #190438240299, a complete Ambroid kit of a Southern All Door Box Car. It is HO scale. I don't normally spend the time to build something like this and then sell it, but back when I started it, I had not narrowed my model railroad focus to a particular era. Now that I have settled on modeling 1949, this car does not fit. Rather than let it sit in box, I figured I would go ahead and move it to a new home. 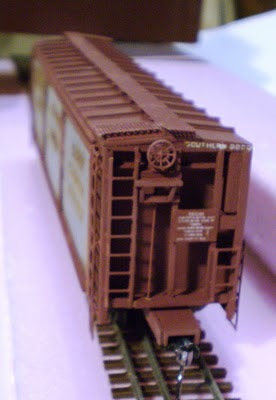 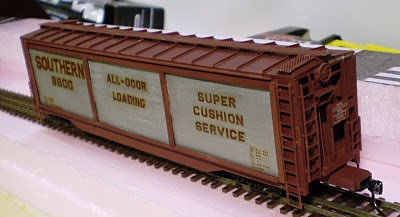 Too many pictures, but I linked to my blog in the ebay listing, and I want potential bidders to see both sides.
Posted by Kent Hurley at 6:59 PM No comments: