I picked this up a few years ago at a train show in Wichita.  According to the experts in the Vintage HO Yahoo group, this is a Penn Line tender, and not a rare item.  Now many are saying it is a Bowser tender.  Either way, a heavy cast metal piece. 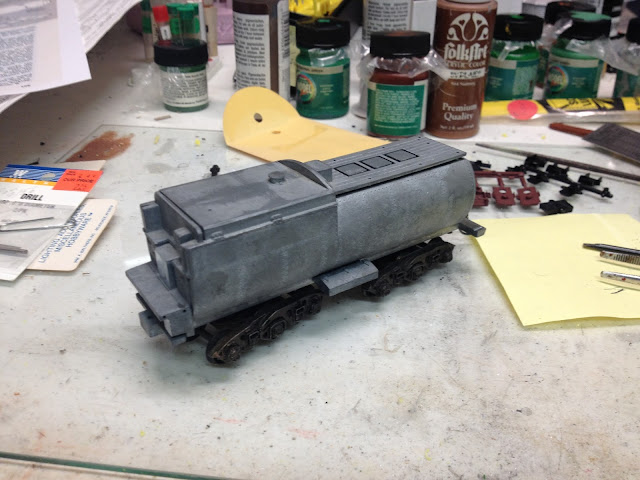 I have been looking for a tender to use as a water car in maintenance of way service, and this fit the bill.  It weighs ton, FWIW. 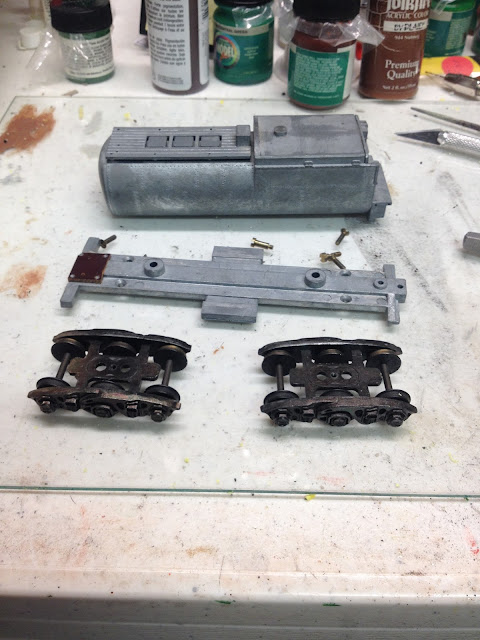 I disassembled it for painting, so not a lot to it.  The most work was going to be fabricating ladders and railings.  As you can guess, I decided to design and 3d print what I could. 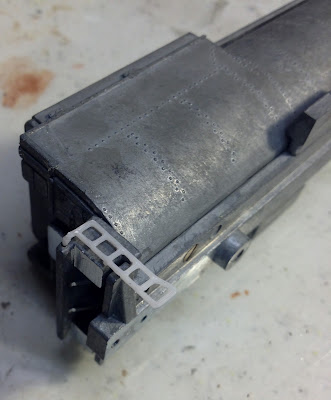 I used various pictures for reference to get an idea of what tender steps and ladders might look like.  I printed them on one of my home printers in ABS. 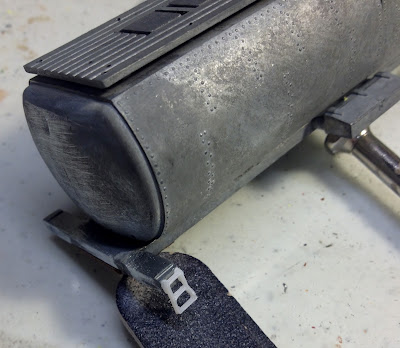 All of the ladders took several attempts to get them to fit the curves of the tender. 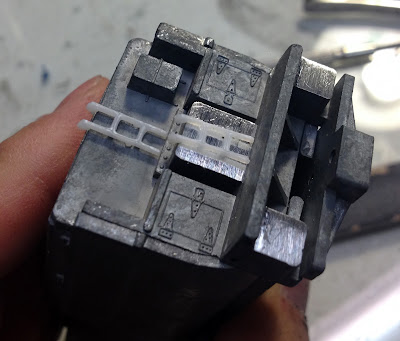 I don't think a single ladder fit on the first attempt. 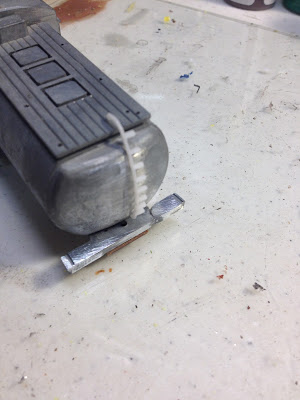 The most challenging ladder was the curved ladder on the back of the tender.  On top of getting the curve correct, there were holes in the casting where the ladder was to fit.  It took several attempts to get everything lined up. 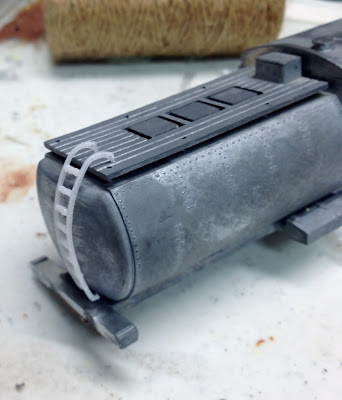 To eliminate any need for support material, I split the ladder in half for printing.  Since it was printed in ABS, it was easily solvent welded together. 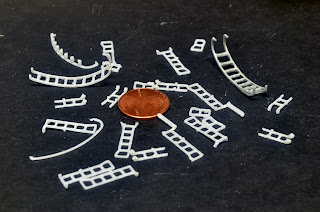 Here are a few of the ladders I printed that did not work. 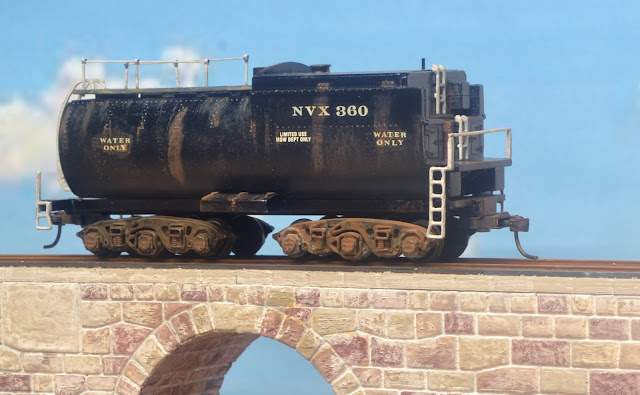 I primed all the painted parts before the finish coat. The ABS parts were glued on with 5-minute epoxy. 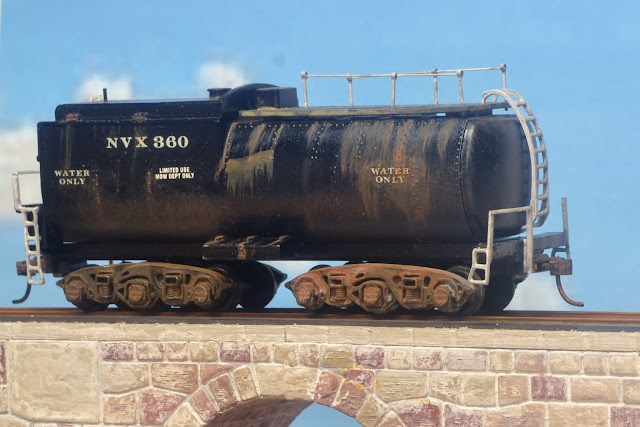 The top hand rails are brass wire with some old Athearn metal stanchions.

A friend picked these up for me two years ago at the Amherst show, http://www.railroadhobbyshow.com/, the largest model railroad show in the country.  They were cheap, as they were in bad shape. 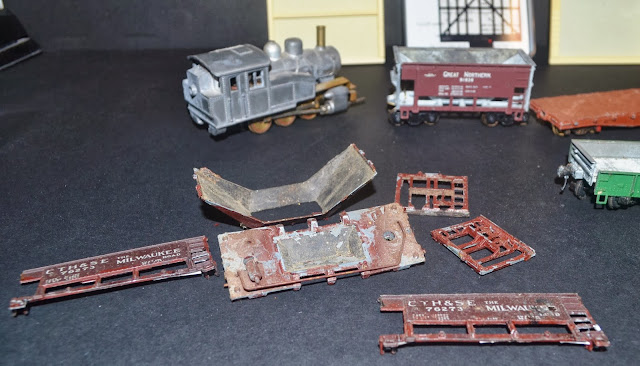 This basket case was broken in several places, and although I spent a lot of time trying to piece it back together, I finally gave up.

I used epoxied styrene to the back of the broken parts, but in the end, there were too many problems trying to fit all the parts together.  I saved the parts to use as car shop junk.

The Great Northern Ore car in the back of the unfortunately fuzzy pictures above only had a few broken parts. 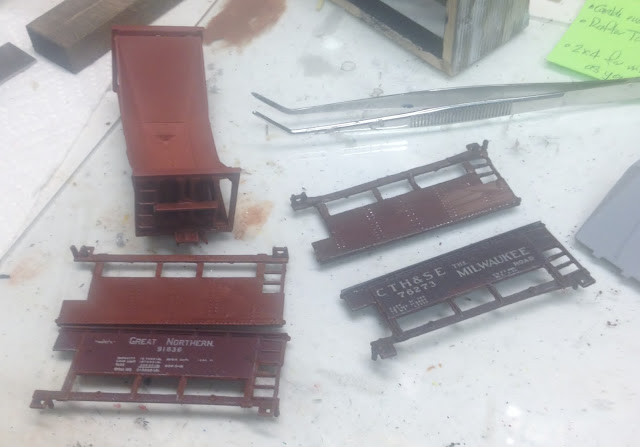 I disassembled it, primed the bare metal surfaces, and then painted the primed surfaces with Badger Modelflex.  Modelflex has three shades of Tuscan Oxide red to choose from. 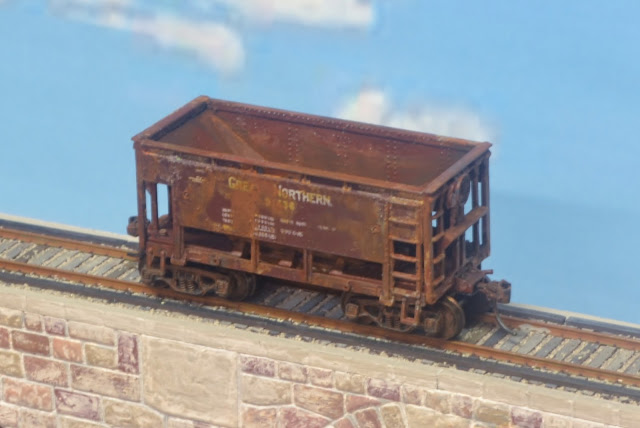 With some rusty weathering, the color match looks fine. 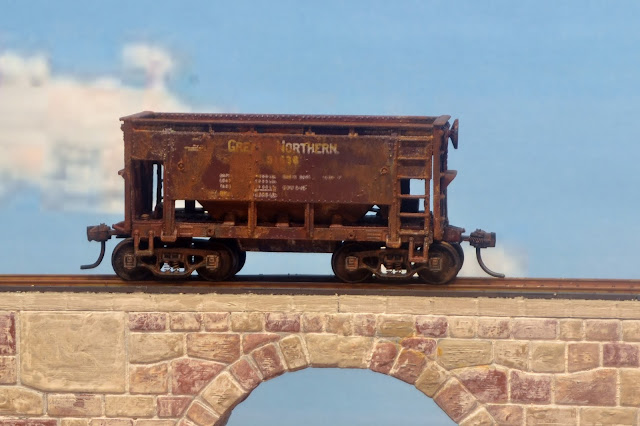 I used Sophisticated Finishes Iron paint, so in essence, the rust is really rust.

I believe all these car are Roundhouse kits.  I stripped the paint off the flat car, and tried to match the paint on the gondola, since it had lettering I wanted to preserve. 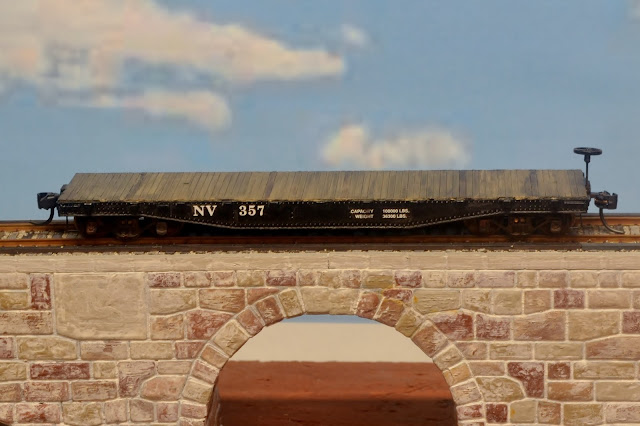 I added A-Line metal stirrups and a brake wheel from the scrap box.  I primed the metal, then painted the sides and underframe gloss black.  I painted the "wood" with a wood toned craft paint, and added some streaks to random boards. 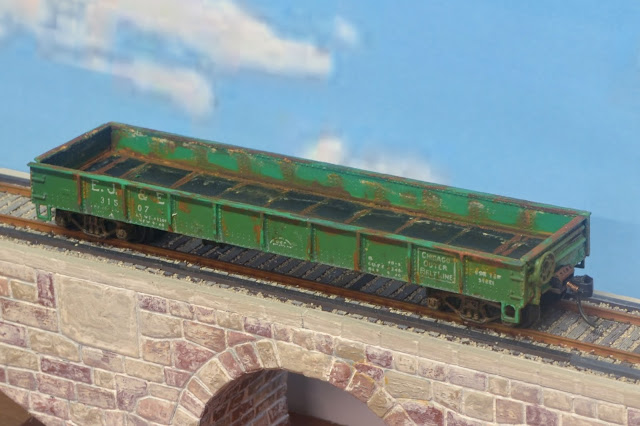 I primed the interior, and painted it with a mix of Modelflex paints.  I then heavily weathered it, again with Sophisticated Finishes Iron paint. 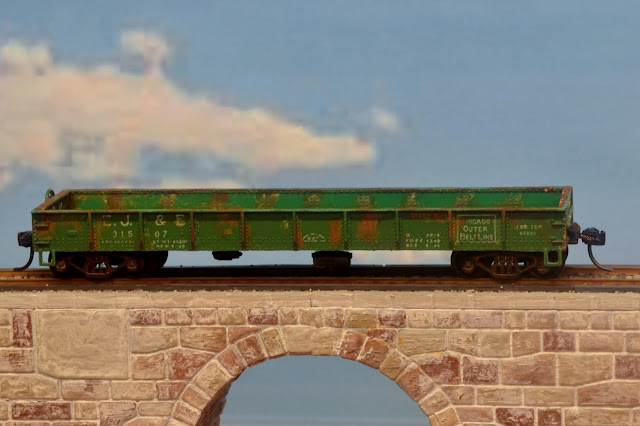 Sophisticated Finishes Iron paint is basically fine iron mixed in paint.  So I just painted it on where I wanted rust.  Once it dries, I apply the rusting solution supplied with the paint.  Wait a day, it this is what you get.

Other vintage HO kits I have posted about:

Paper side and metal kits
Posted by Kent Hurley at 6:34 PM 2 comments:

I like to build the old kits, using modern materials when I feel it fits the project.  I have seven vintage kits I just finished up, and will be posting them over the next couple weeks.  Here are a couple Red Ball Kits, that date back when cars had printed paper sides, and consisted of wood and metal parts...pre-plastic, for the most part. 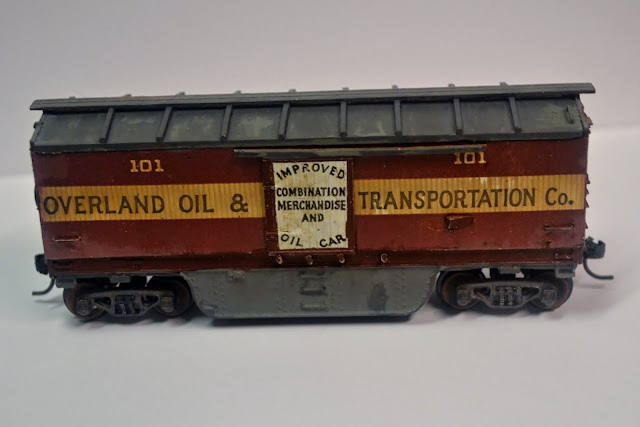 I picked this up off eBay.  It had lots of damage, but it was a kit I had been wanting, and it looked repairable.  This was a prototype for an early tank car and box car combination.  The thought was that one would fill either the tank portion or the box portion, so the car could be hauling a payload in both directions. 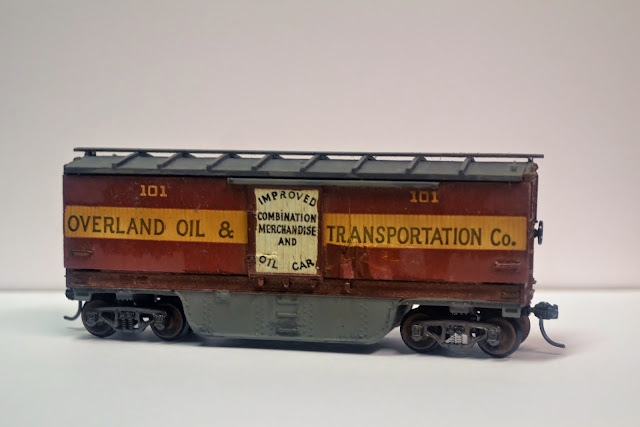 This was a paper side kit, with cast metal details.  The ends and underframe are metal, and the roof is wood.  With a lot of weathering, it came out acceptable. 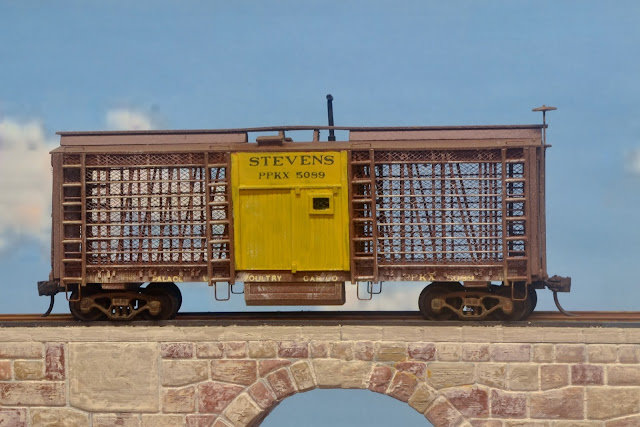 This was also a paper side kit, bit I did not use the paper sides.  I scratch built most of the model from wood, wire and tulle. 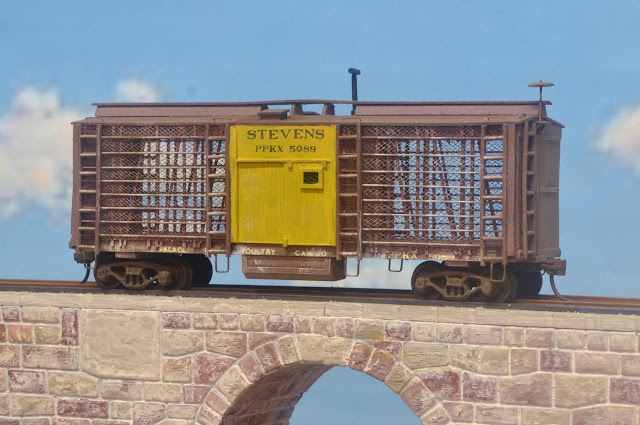 The only parts of the kit I used were the cast metal ends, the feed box (the wood block under the floor on this side), the wood roof details, and the metal ladders. 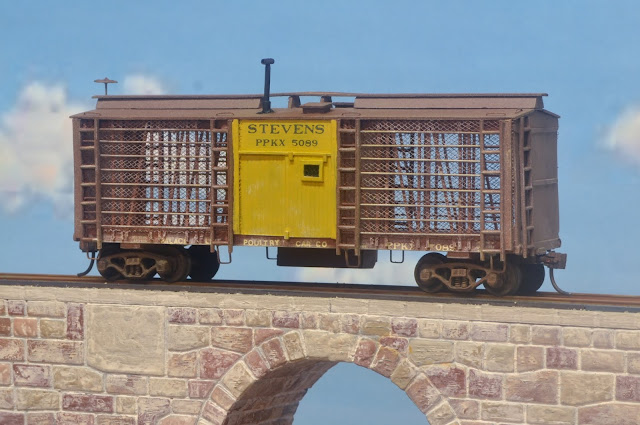 The rest is either parts from the parts bin, or scratch built.  All the lettering was done with decals, one letter at a time, based on the original paper sides. 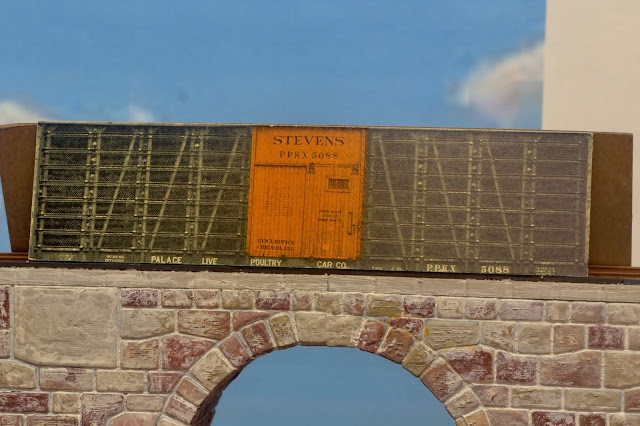 This is the original paper side I used for inspiration.

Next up, some Roundhouse metal kits I picked up at the Amherst Show a couple years ago.  I also have a Penn Line tender I built in to a water car, and trackside water tank that is a 1949 kit...,so it fits my modeling era perfectly.