I have been printing quite a few individual blocks for people, and I thought I would try to print a pallet of blocks.  Then I decided, what the heck, lets try to print the wood pallet too. 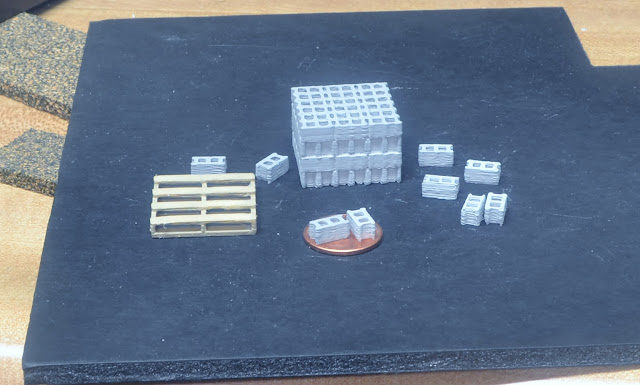 I have not performed any cleanup on the block, I just primed them.  The pallet did take some cleanup to make it anywhere near reasonable. 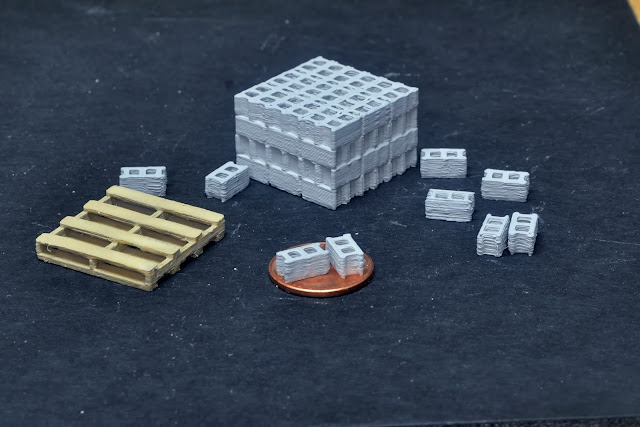 There were some strings hanging down that needed filed off, then a little sanding on the faces.  The pallet was painted with craft paints. 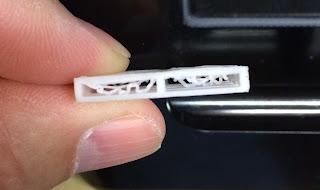 I changed my design since I printed this one, and there is less stringing now, but still one or two at each board, as I am printing this without any support, and few strings will sag.  A touch with the hobby knife, and they are gone. 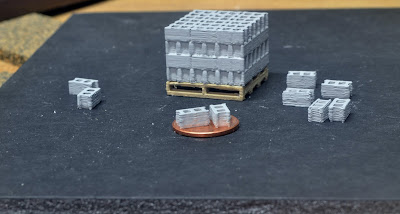 A little sanding on the faces of the blocks would help them, but I wanted to show what they look like right out of the printer. 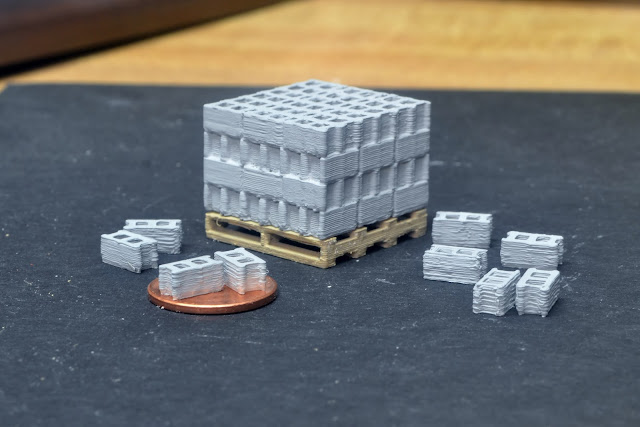 The extreme close up shows all the flaws.  And since I don't model in O scale, I don't have any use for them anyway.

I have done barrels, both wood and steel in O scale, http://nvrr49.blogspot.com/2014/06/barrels-wood-and-steel-ho-s-and-o-scale.html
Posted by Kent Hurley at 12:00 PM No comments:

For a lumber yard diorama, fsm-barnstead-lumber-ho-scale, I 3d printed several details at Shapeways, including pallets of concrete blocks and some individual concrete blocks. 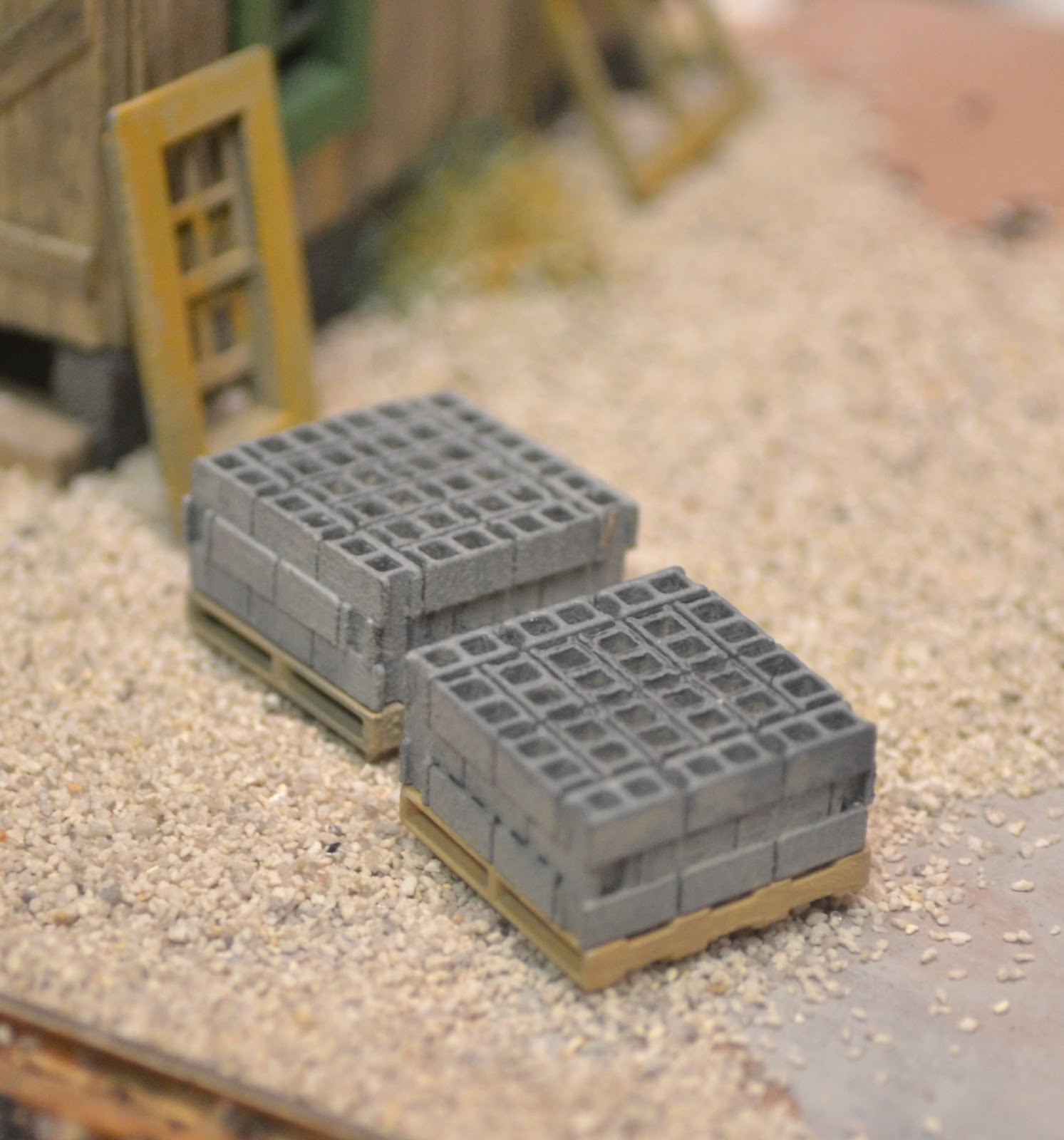 As you can see, they came out fantastic, all be it, a little expensive, as Shapeways is not cheap.

I tried printing something similar on my Afinia printer, but with it's software limitations, it will not allow one to print walls any thinner than about .020" thick.  I was able to do O scale block that look pretty good.  As noted in my previous post regarding the M3D printer, it will print smaller wall thicknesses than the Afinia.  If you print them very tall or without lots of support, they will fail, which is why the Afinia software ignores walls that thin.

Since a concrete block is not very tall, and with all the bracing built right into the block, I thought maybe it could be printed in HO scale on the M3D.  While certainly no where near as fine as the blocks done at Shapeways, to me, they are quite acceptable as scenery items. 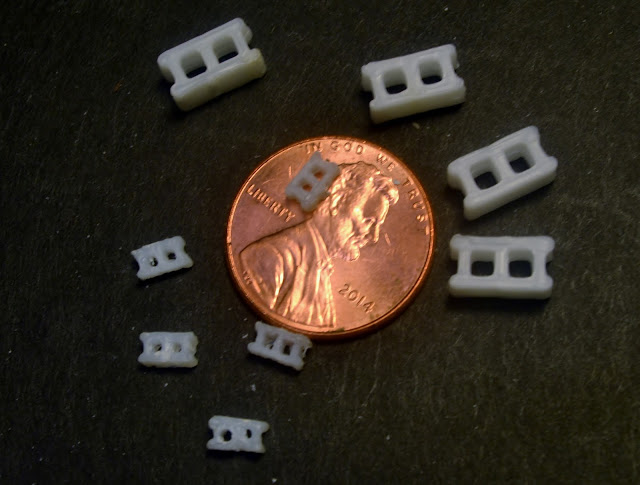 This picture is of the raw prints, right off the printer.  The O scale blocks were made on the Afinia, and the HO scale ones were printed on the M3D.  The HO scale blocks take a little clean up, like a metal casting might, only they are much easier to file and sand since they are ABS plastic. 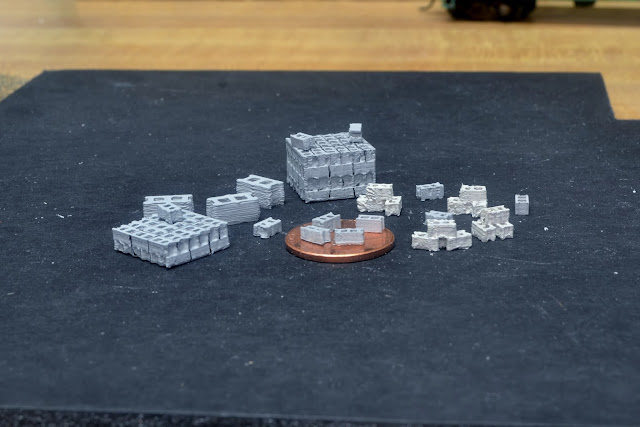 This extreme closeup shows all the good, the bad and the ugly.  The block on right side of the penny is one make at Shapeways.  Notice it is perfectly smooth, and perfect, even in this close up view.  The stacks to the right, and the pallets to the left were printed as one piece. 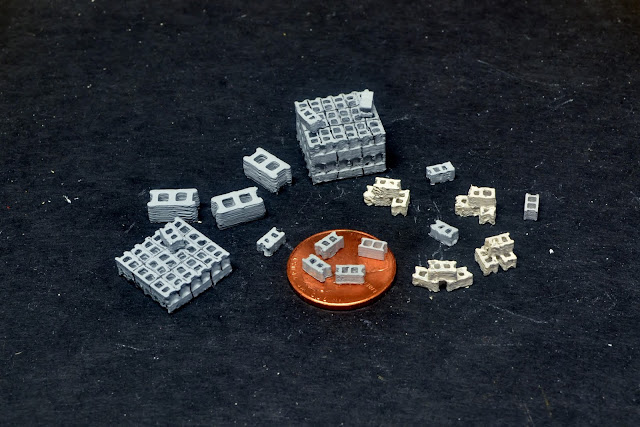 The big blocks in the upper left are O scale, and were done on the Afinia, 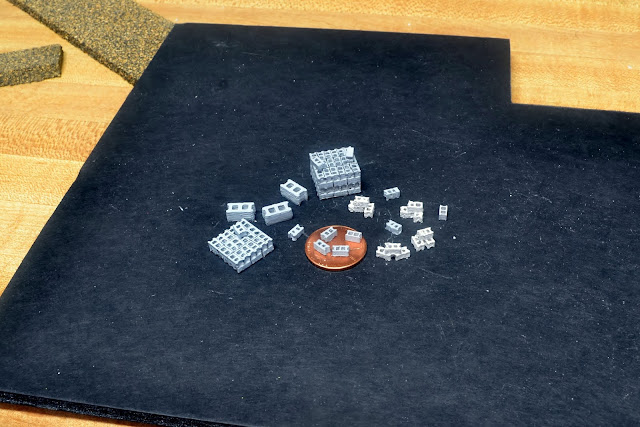 This a more normal viewing distance, and in my opinion, they look quite acceptable.  These were printed in white ABS, and painted. 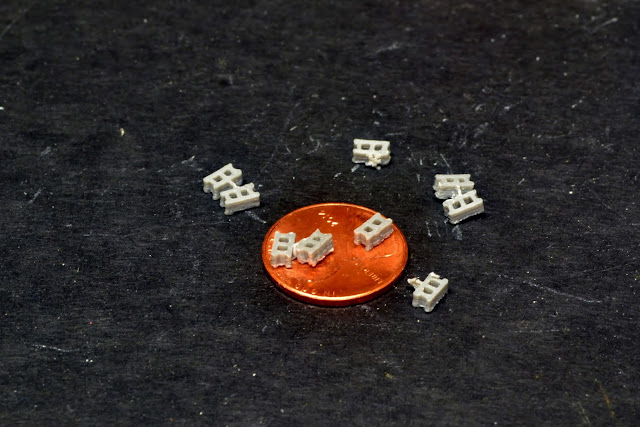 While I was writing this, I had some silver (it looks like gray to me) filament in the printer, so I thought I would print some in the gray to see how they looked.

Honestly, I think they look better than the ones printed in white and painted.  For whatever reason, the gray filament seems to print cleaner.  They still need some cleanup, but a few quick cuts with the hobby knife, and hit them with a file, and they will be great.


The M3D will allow me to print some items I was not able to previously.

I also printed some shelves for a piano store on the M3D, and they can be viewed at this link, http://nvrr49.blogspot.com/2015/09/pianos-ho-scale-3d-printed-at.html

Posted by Kent Hurley at 6:51 PM No comments:

I had printed these previously, and blogged about them too, but there were issues with the designs, as some details did not print.  This post shows the redesigned items, and they all printed correctly.  For comparison purposes, here is a link to the previous post, Original shapeways-bath-fixtures post 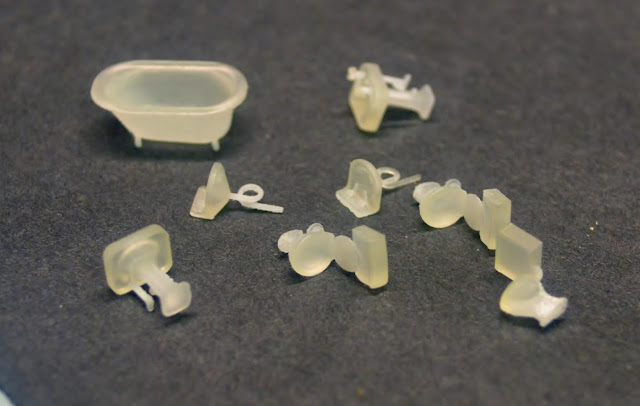 Here is what they look like when they arrive from Shapeways. 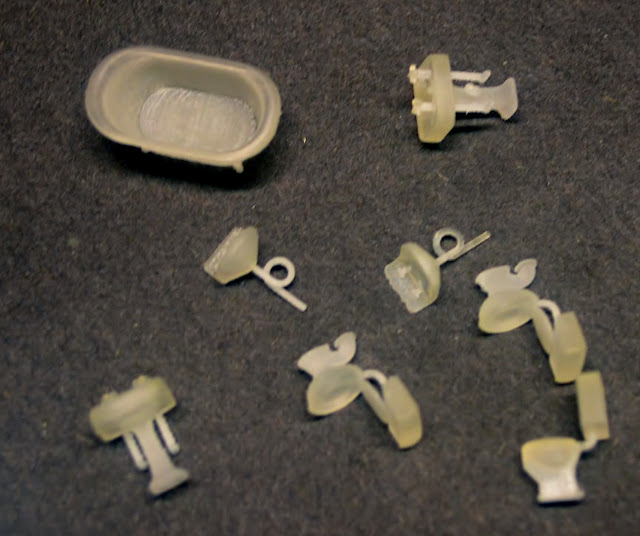 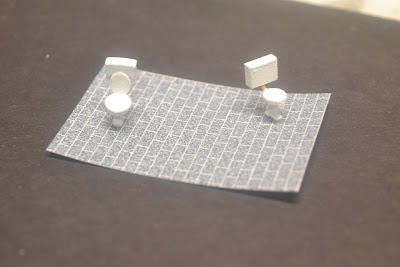 I designed two different toilets.  Both with a wall mount tanks, although by 1949, most new toilets had bowl mounted tanks. 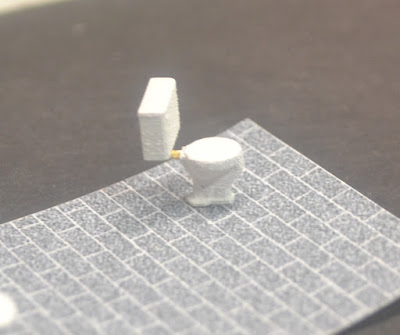 The bowl mounted tank design can be printed on my home printer, but to do the wall mount, I went with Shapeways.  With the lid down, the model is quite fragile. 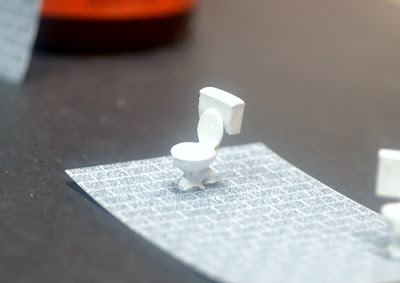 One lid up, and one down.  The lit up adds a lot of extra strength 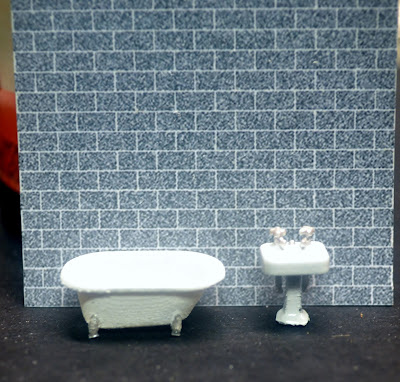 The faucets on the previous designs did not print, and neither did all the legs on the tubs.  As you can see here, with a little adjustment, the printed fine. The supply lines under the sink are extremely fragile. 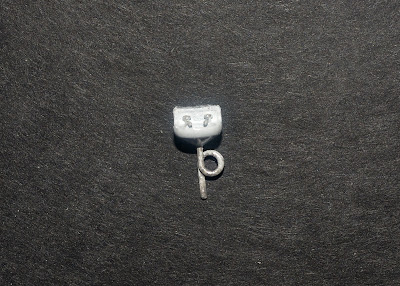 Now all I have to do is find a use for them!  So far, I have not built a building where I needed to detail the restroom,

Here are a few of my past posts on items I have designed and printed at Shapeways.