This should be a pretty easy post to do, since I just did a clinic on this at the MoPac & Frisco convention a few weeks back in Joplin.  Just cut a past from that presentation, except now I have to write something instead of just flapping my lips.

I am always looking for something new to try, and this looked like it would just fit on my small printer in one direction, and, if I could design it correctly, it would be the largest item I had printed.

I found this picture of the Cassville and Exeter depot in Cassville, MO on Jeff Cooney's web site.  It was dated 1953. 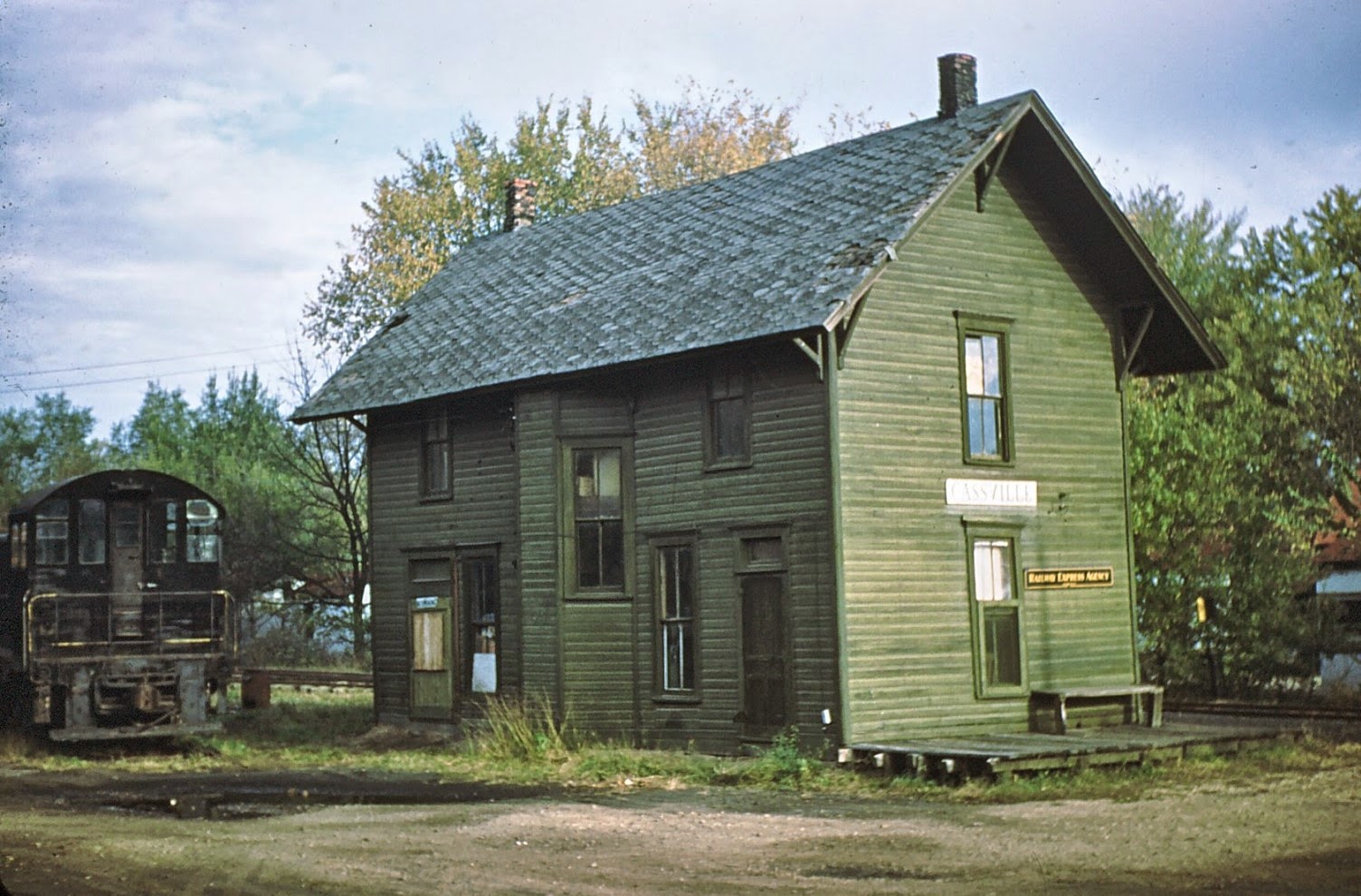 With a little internet research, I found two more pictures at the Barry County Historical Society. 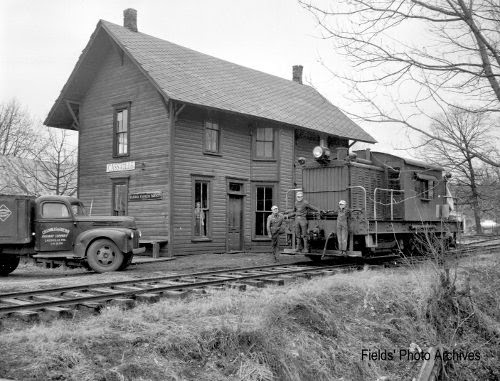 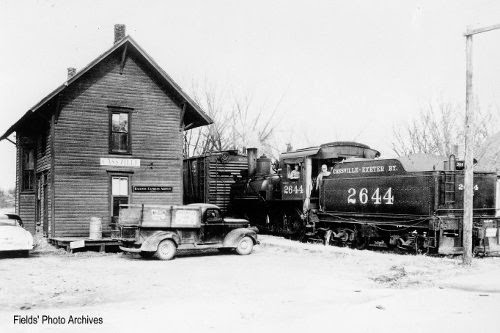 From this photos, I was able to determine the window and door arrangement for about three quarters of the building.  What is behind the engine in the second photo, I have no idea, and what the opposite end looks like.  I made a few assumptions, and started drawing.

I first uploaded the color picture and sizing it full size using the assumption that the door was a standard 3' x 6'-8' door.  I then went window shopping, literally.  I looked through the Tichy online catalog to find some windows and doors that would fit this build.

I then drew the windows,

colored them so they would be easy to see, and placed them on the model in the correct locations.

Then I punched out the openings, and added the gable ends, Now, if you have followed my blog much, you will recall that to get lap siding to print best, the building should be printed upside down.

So I designed a support system to be cut off later.  Then I flipped up for printing. 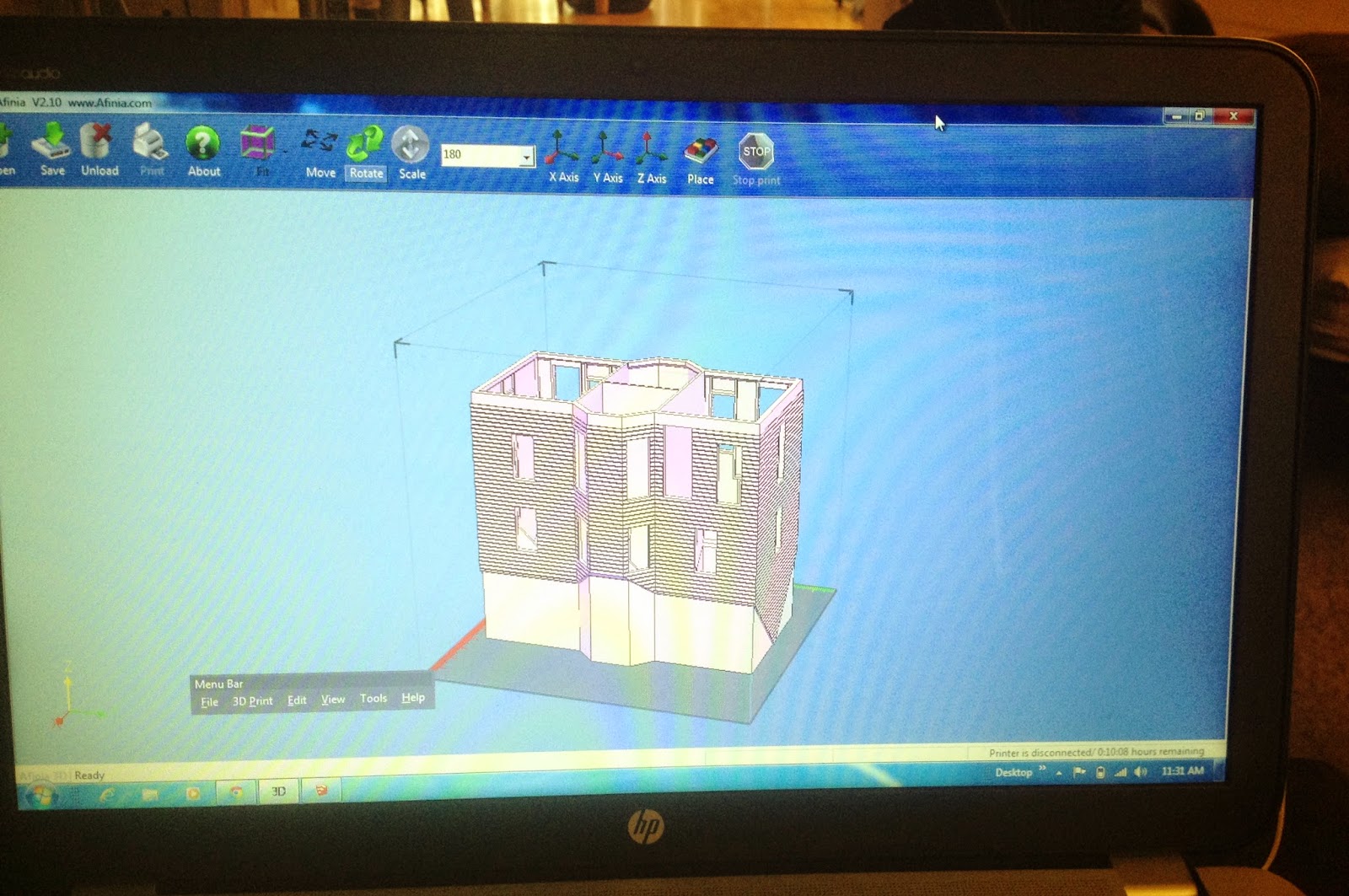 Here is a screen shot of the print software, showing that the building takes up most of the printing platform. 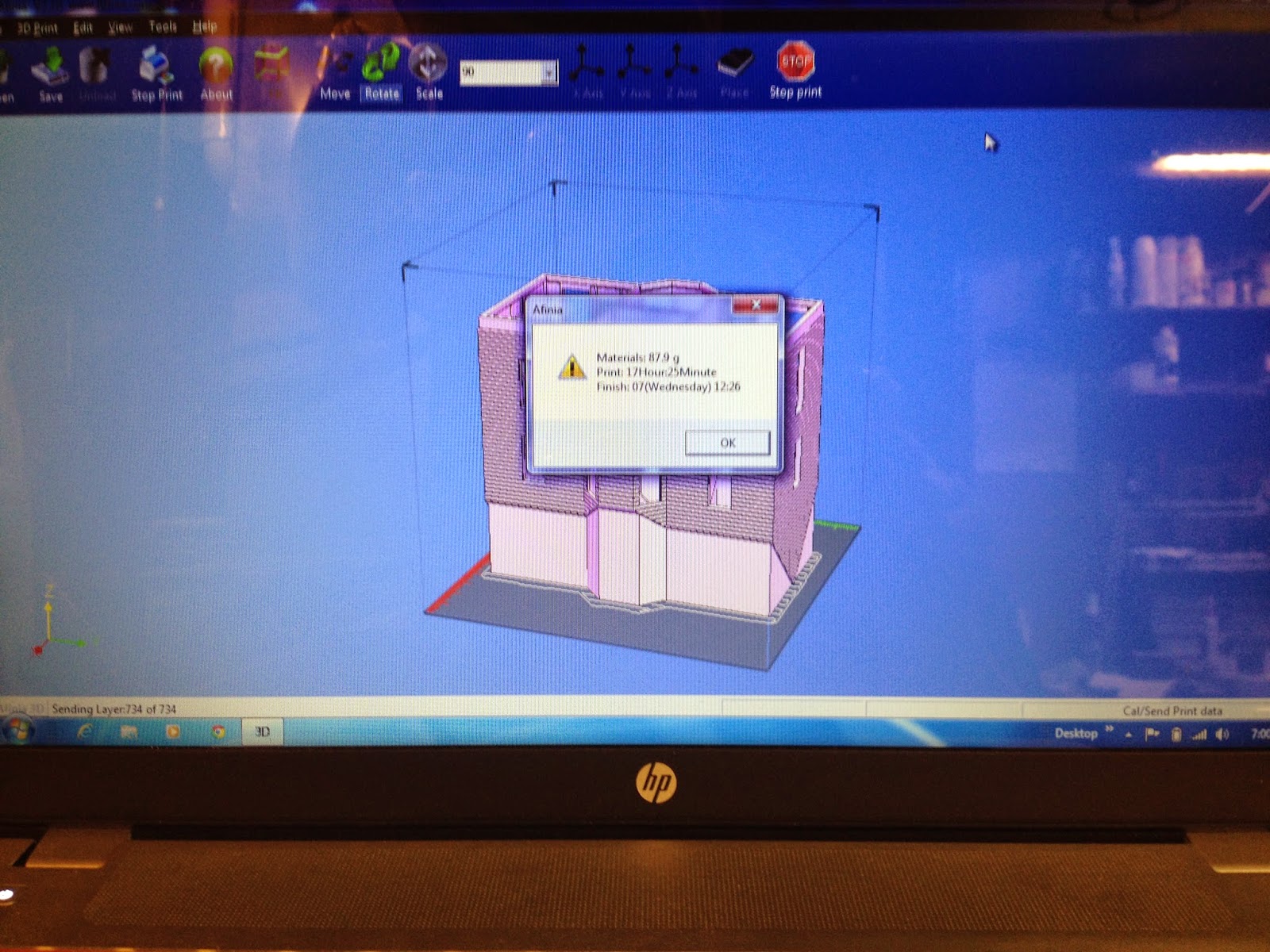 This is by far the longest print I have done, this building took 17 hours and 25 minutes! 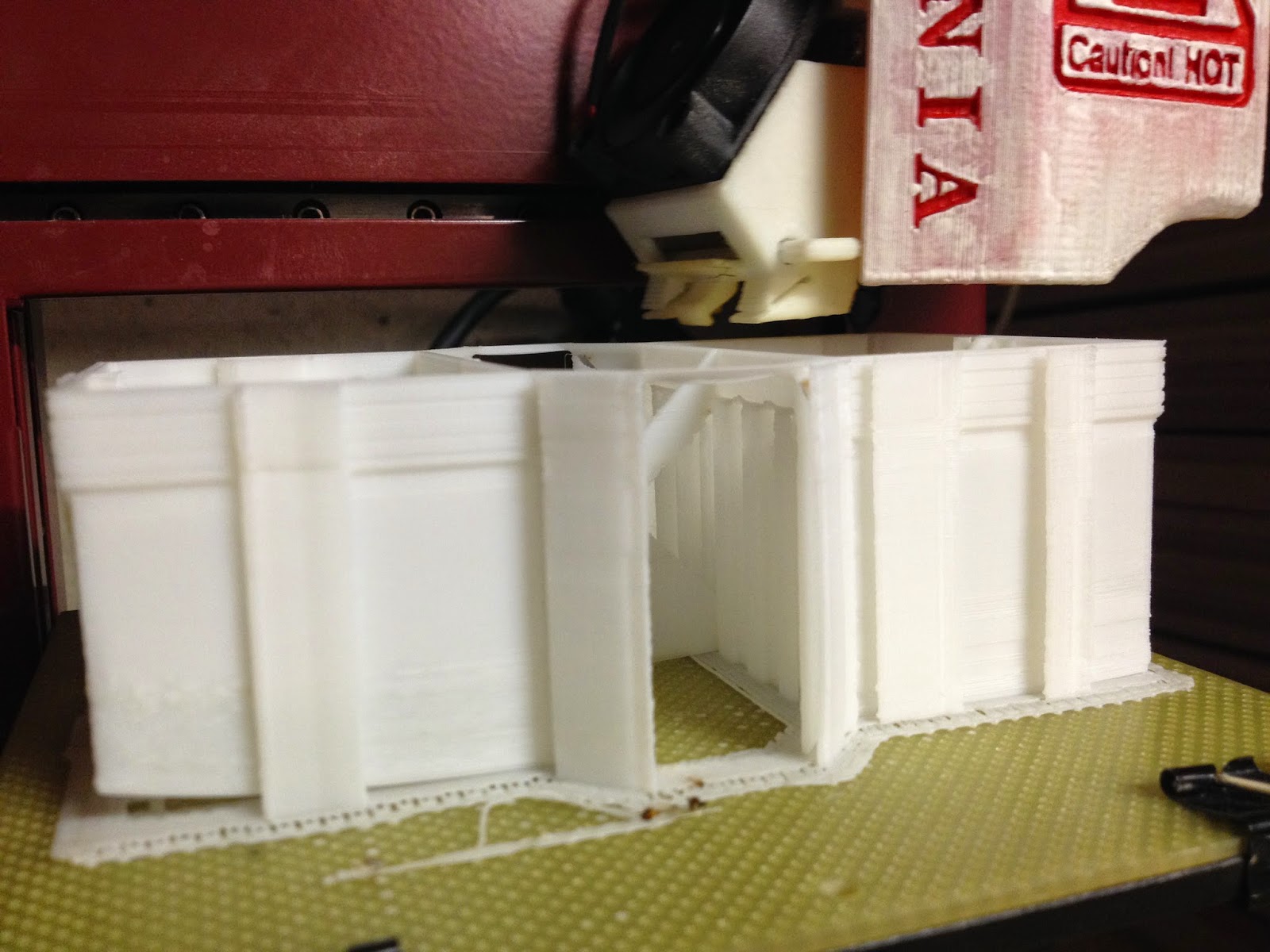 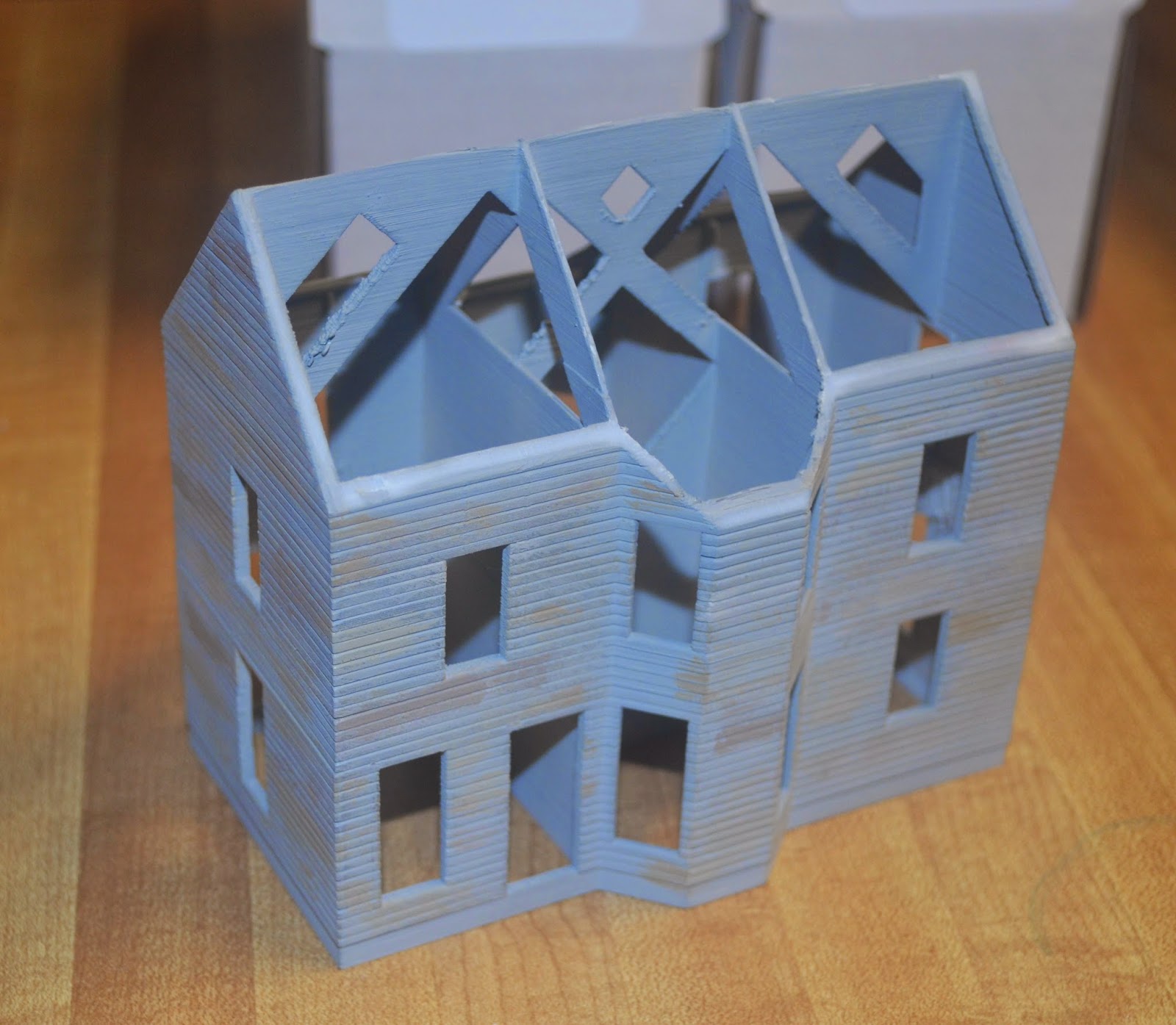 After cutting off the support material, I primed the building and added some color to show through the peeling paint. 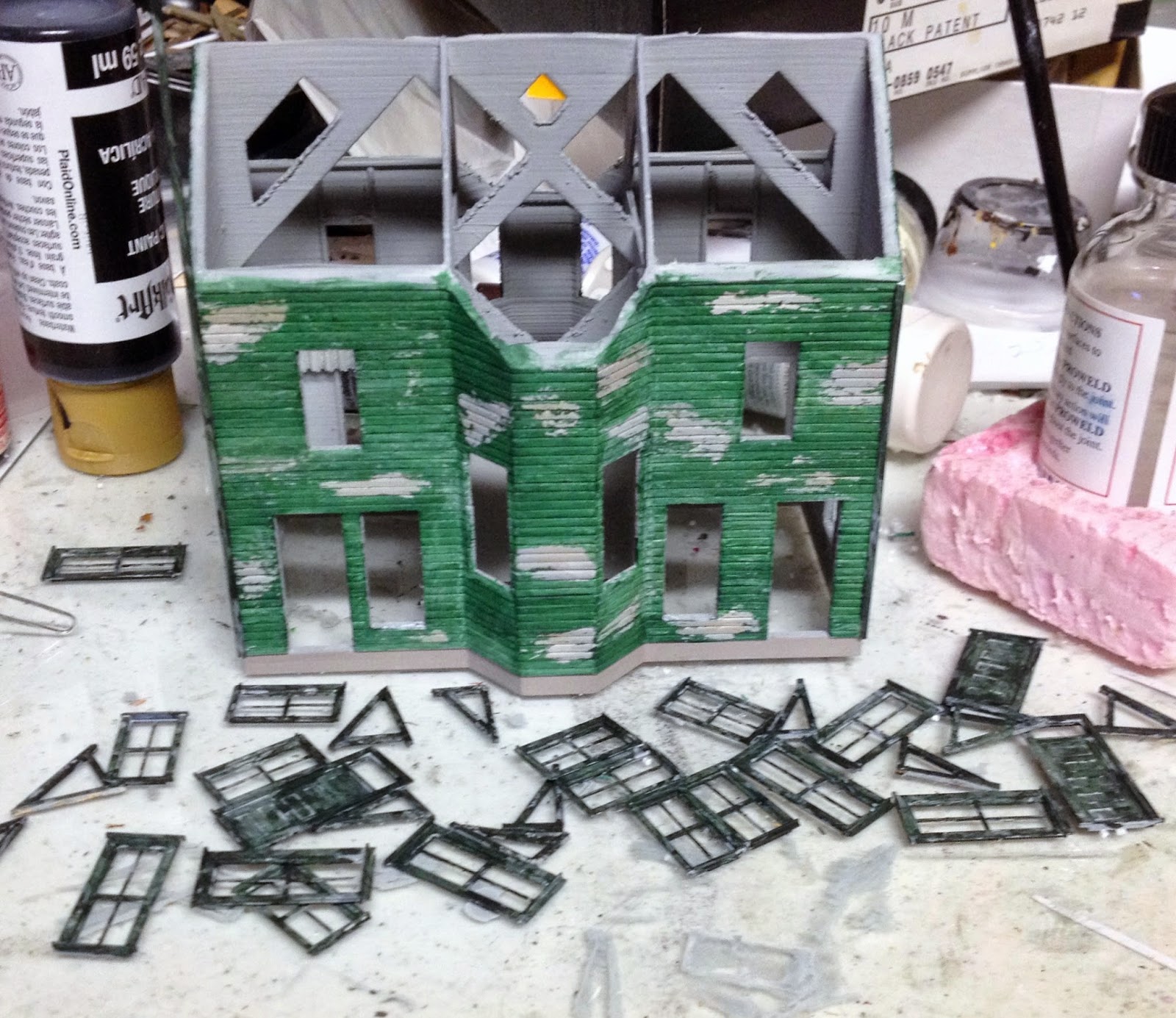 Windows, building and roof supports painted and ready to assembled. 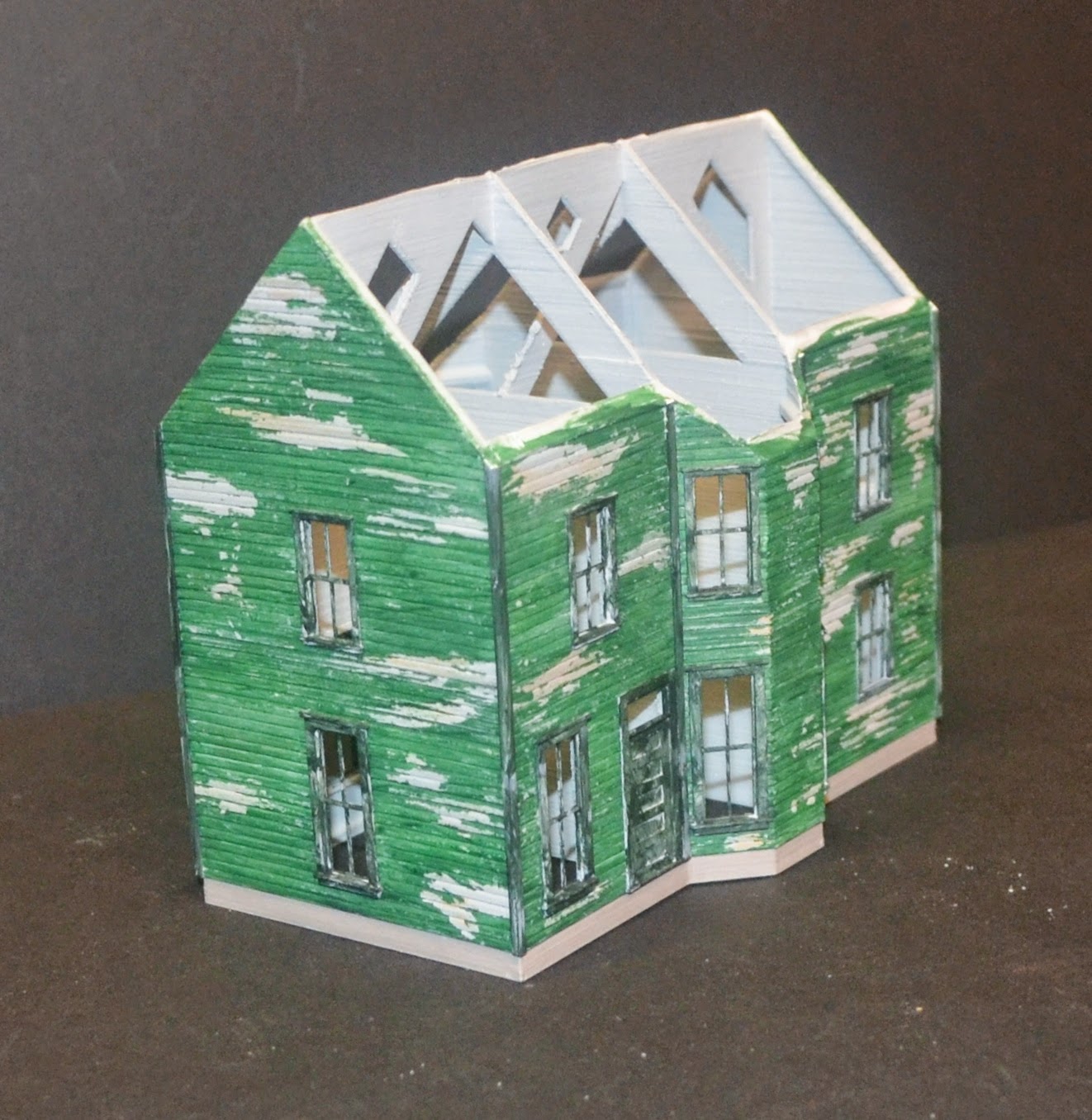 The windows and doors all fit fine, which is good, cause I would not want to have to watch another 17 hour print.

For the roof supports, I designed two fixtures to not only hold the 4x4 lumber while the glue dried, but I was also able to use the same fixture to cut the lumber to size. 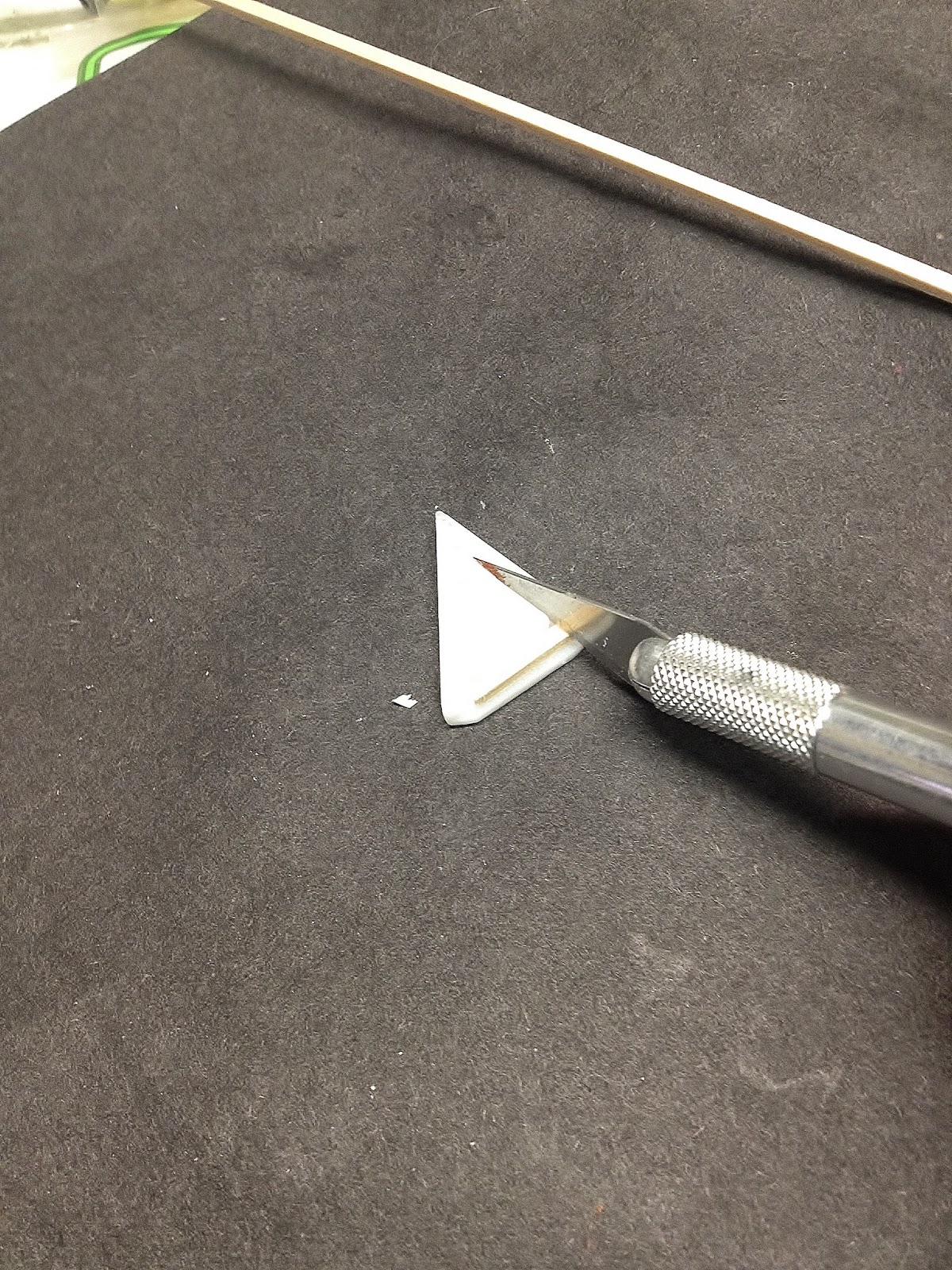 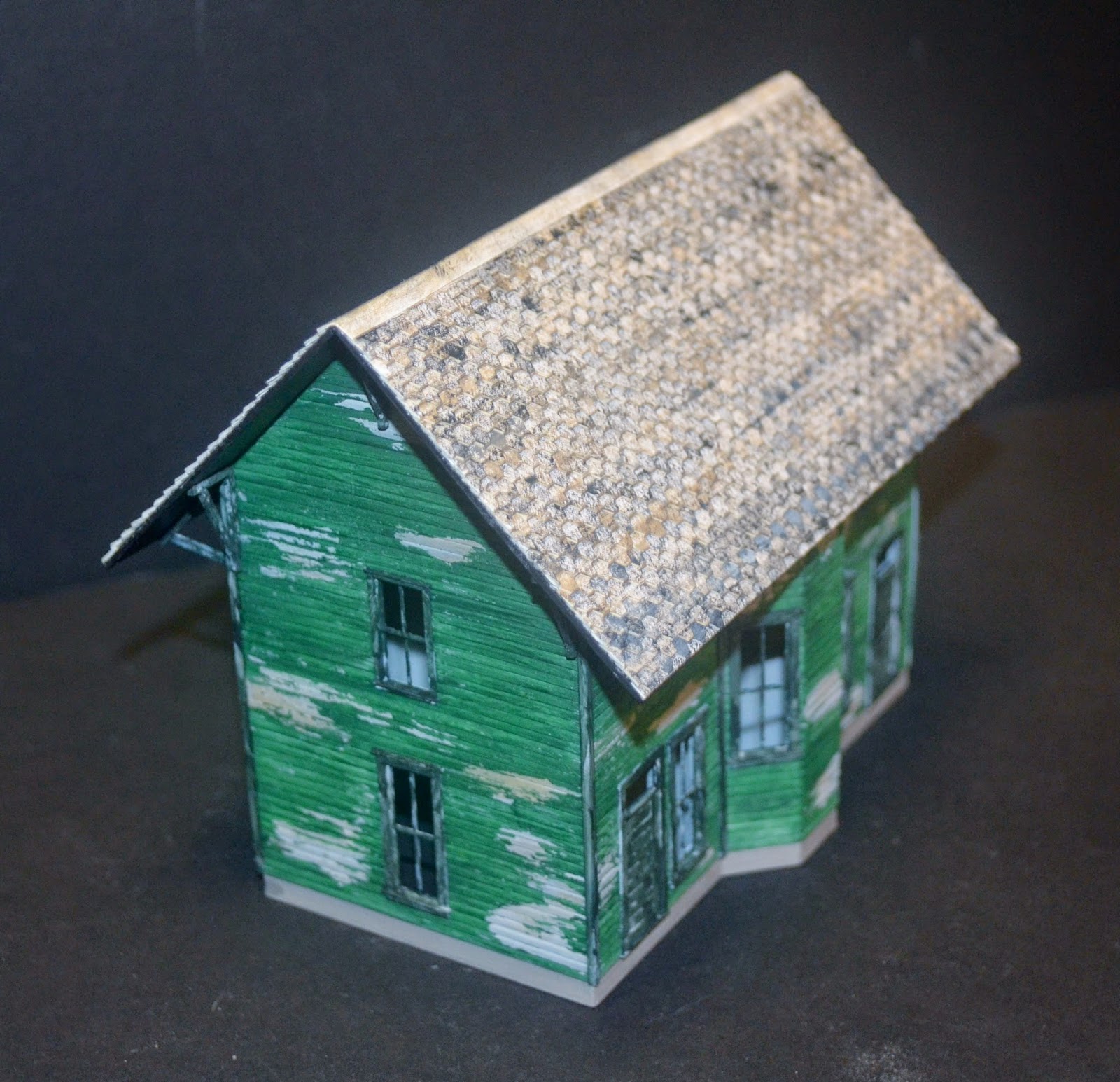 The windows were solvent welded in using Methylene Chloride.  Styrene sheet was used for the roof and Laser Kit paper shingles were applied.  The wood roof supports were glued in place with Aleenes Tacky glue. 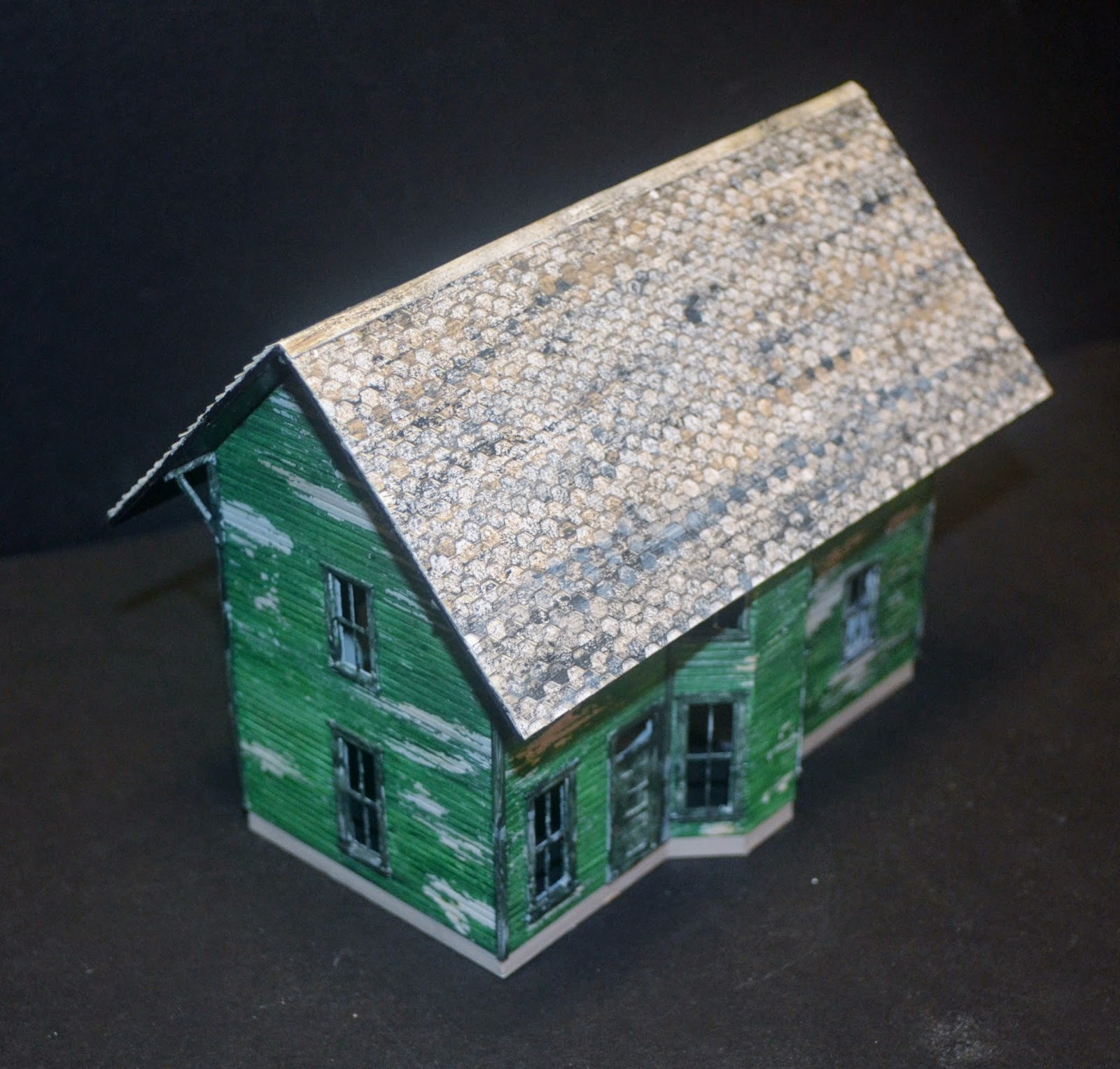 I have not had time in the last few weeks to install the dock on the end, and plant it on a diorama. 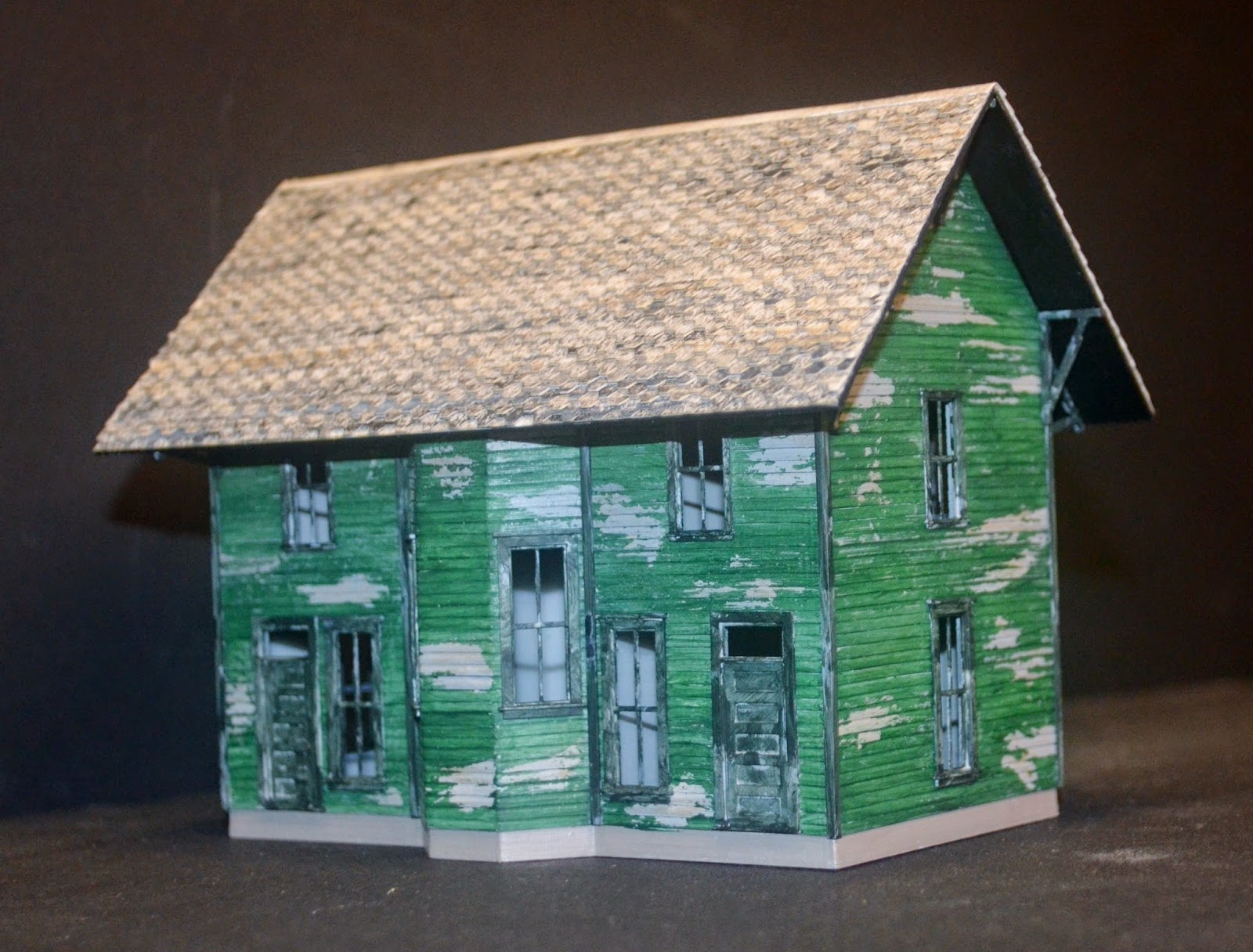 A good shot of both of the wood roof supports. 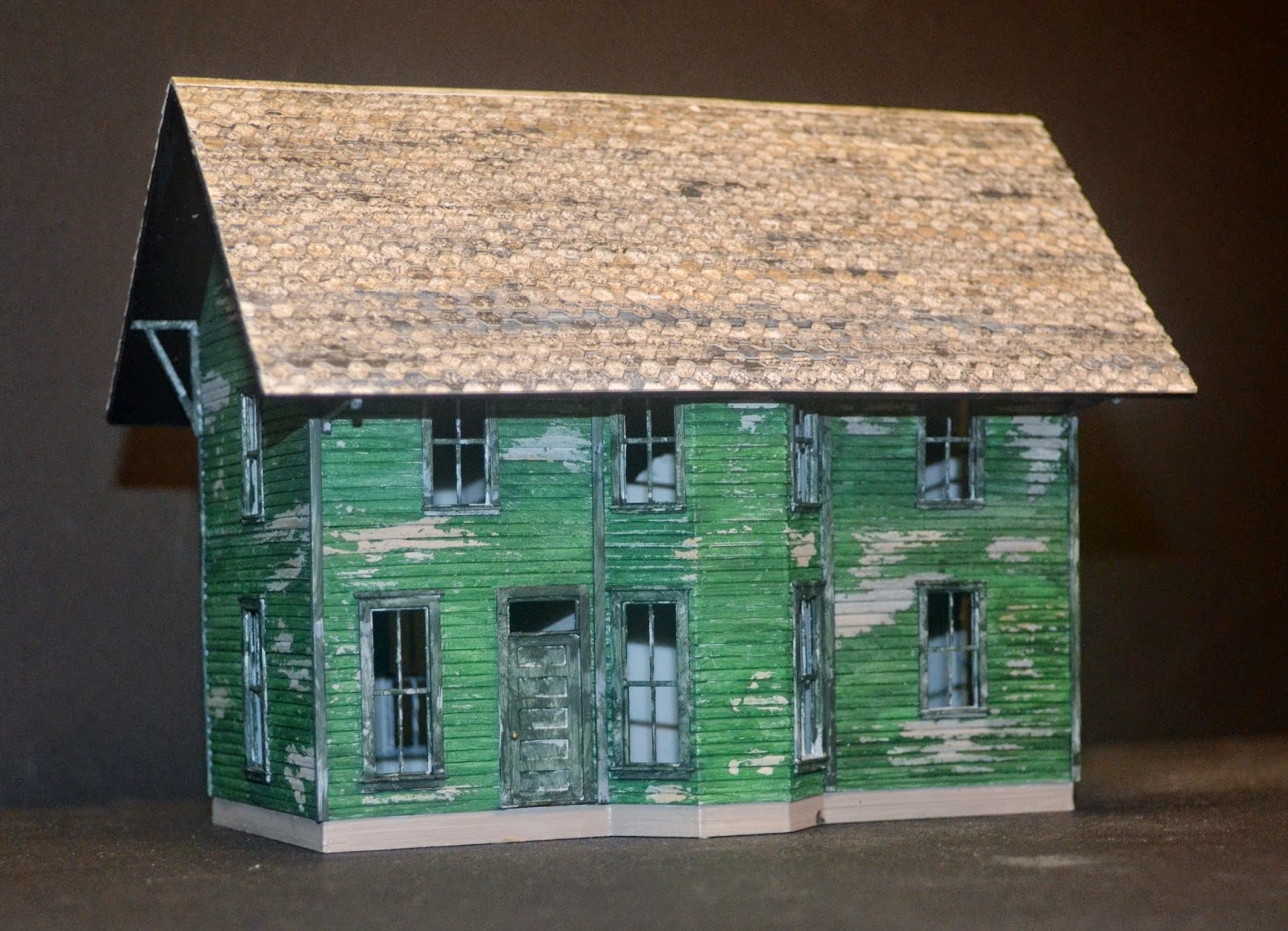 I over did the peeling paint.

The shingles are just dry brushed with craft paints.


I will be finishing this up with a diorama that includes track, the loading dock and a parking area.  I also still have to put the glass in the windows.